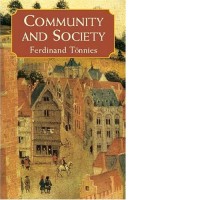 
Ferdinand Tönnies’ Gemeinschaft und Gesellschaft (first published in 1887) is a classic of social and political theory, which explores the clash between small-scale neighbourhood-based ‘communities’ and large-scale competitive market ‘societies’. Tönnies considers all aspects of life – political, economic, legal and family; art, religion and culture; the construction of ‘selfhood’ and ‘personhood’; and modes of cognition, language and understanding. Often recognised as one of the founding texts of sociology, Gemeinschaft und Gesellschaft is also a highly significant contribution to European political thought and philosophy, with particular relevance to the legacies of Hobbes and Kant. It is at once a response to modernity, a theoretical exercise in social, political and moral science, and an unusual commentary on the inner character of ‘democratic socialism’. This new English rendition will introduce Tönnies’ work to a fresh generation of English-speaking readers with interests in social and political theory and the history of European ideas.