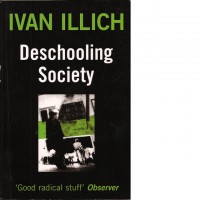 
The book that brought Ivan Illich to public attention was Deschooling Society (1971), a critical discourse on education as practised in “modern” economies. According to a contemporary review in The Libertarian Forum, “Illich’s advocacy of the free market in education is the bone in the throat that is choking the public educators.”(Although it is important to note that Illich’s opposition was not merely to publicly-funded schooling, as with the libertarians, but schooling as such; the disestablishment of schools was for him not a means to a free market in educational services, but a deschooled society, which was a more fundamental shift. As he later asserted in “After Deschooling, What?” (1973): ‘We can disestablish schools, or we can deschool culture’.[8] He opposed advocates of free-market education as “the most dangerous category of educational reformers.”) Full of detail on contemporary programs and concerns, the book remains as radical today as it was when first published. Giving examples of the ineffectual nature of institutionalized education, Illich posited self-directed education, supported by intentional social relations, in fluid informal arrangements:

Universal education through schooling is not feasible. It would be no more feasible if it were attempted by means of alternative institutions built on the style of present schools. Neither new attitudes of teachers toward their pupils nor the proliferation of educational hardware or software (in classroom or bedroom), nor finally the attempt to expand the pedagogue’s responsibility until it engulfs his pupils’ lifetimes will deliver universal education. The current search for new educational funnels must be reversed into the search for their institutional inverse: educational webs which heighten the opportunity for each one to transform each moment of his living into one of learning, sharing, and caring. We hope to contribute concepts needed by those who conduct such counterfoil research on education–and also to those who seek alternatives to other established service industries. —Ivan Illich,

The book is more than a critique – it contains suggestions for a reinvention of learning throughout society and lifetime. Particularly striking is his call (in 1971) for the use of advanced technology to support “learning webs.”

The operation of a peer-matching network would be simple. The user would identify himself by name and address and describe the activity for which he sought a peer. A computer would send him back the names and addresses of all those who had inserted the same description. It is amazing that such a simple utility has never been used on a broad scale for publicly valued activity. —Ivan Illich