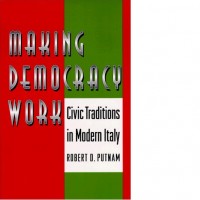 
Why do some democratic governments succeed and others fail? In a book that has received attention from policymakers and civic activists in America and around the world, Robert Putnam and his collaborators offer empirical evidence for the importance of “civic community” in developing successful institutions. Their focus is on a unique experiment begun in 1970 when Italy created new governments for each of its regions. After spending two decades analyzing the efficacy of these governments in such fields as agriculture, housing, and health services, they reveal patterns of associationism, trust, and cooperation that facilitate good governance and economic prosperity.