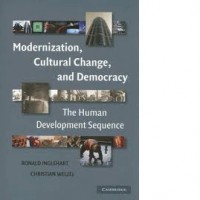 
This book demonstrates that people’s basic values and beliefs are changing, in ways that affect their political, sexual, economic, and religious behaviour. These changes are roughly predictable: to a large extent, they can be interpreted on the basis of a revised version of modernisation theory presented here. Drawing on a massive body of evidence from societies containing 85 percent of the world’s population, the authors demonstrate that modernisation is a process of human development, in which economic development gives rise to cultural changes that make individual autonomy, gender equality, and democracy increasingly likely. The authors present a model of social change that predicts how the value systems play a crucial role in the emergence and flourishing of democratic institutions – and that modernisation brings coherent cultural changes that are conducive to democratisation.