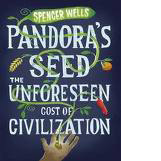 
Pandora’s Seed takes us on a powerful and provocative globe-trotting tour of human history, back to a seminal event roughly 10,000 years ago, when our species made a radical shift in its way of life: we became farmers rather than hunter-gatherers, setting in motion a momentous chain of events that could not have been foreseen at the time. Although this decision to control our own food supply is what propelled us into the modern world, Wells demonstrates with the latest genetic and anthropological data that such a dramatic shift in lifestyle had a downside that we’re only beginning to recognize. Growing grain crops ultimately made the planet more crowded, sedentary and unhealthy. The expanding population and the need to apportion limiting resources such as water created hierarchies and inequalities. The desire to control — and no longer cooperate with — nature altered the concept of religion, making deities fewer and more influential, foreshadowing today’s fanaticisms. The proximity of humans and animals bred diseases that metastasized over time. Freedom of movement and choice were replaced by a pressure to work that is the forebear of anxiety and depression millions feel today. Wells then offers a hopeful prescription for altering a life to which we were always ill-suited, changing priorities and self-destructive appetites before it’s too late.