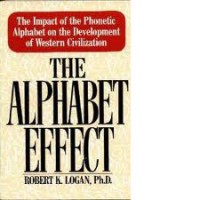 
The Alphabet Effect develops the hypothesis that the alphabet, codified law, monotheism, abstract science and deductive logic form an autocatalytic set of ideas that developed uniquely between 2000 BC and 500 BC between the Tigris-Euphrates River system and the Aegean Sea. The Sixth Language develops the hypothesis that speech, writing, math, science, computing and the Internet form an evolutionary chain of languages. It won the Suzanne K. Langer Award for Outstanding Scholarship in the Ecology of Symbolic Form in 2000 from the Media Ecology Association. The Extended Mind: The Emergence of Language, the Human Mind and Culture develops a model for the origin of language, the human mind and culture using ideas from The Sixth Language and emergence theory.