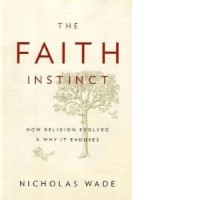 
For at least the last fifty thousand years, and probably much longer, people have practiced religion. Yet little attention has been given, either by believers or atheists, to the question of whether this universal human behavior might have an evolutionary basis. Did religion evolve, in other words, beacause it helped people in early societies survive?

In this original and controversial book, longtime reporter for The New York Times’s Science section Nicholas Wade gathers new evidence showing why religion became so essential in the course of human evolution, and how an instinct for faith has been hardwired into human nature. This startling thesis is sure to catch the attention of both believers and nonbelievers. People of faith may not warm up to the view that the mind’s receptivity to religion has been shaped by evolution. Atheists may not embrace the idea that religious expression evolved because it conferred essential benefits on ancient societies and their successors. As The Faith Instinct argues however, both groups must address the fact, little understood before now, that religious behavior is an evolved part of human nature.
Review from Good Reads: http://www.goodreads.com/book/show/6402547-the-faith-instinct

According to Wade, a New York Times science writer, religions are machines for manufacturing social solidarity. They bind us into groups. Long ago, codes requiring altruistic behavior, and the gods who enforced them, helped human society expand from families to bands of people who were not necessarily related. We didn’t become religious creatures because we became social; we became social creatures because we became religious. Or, to put it in Darwinian terms, being willing to live and die for their coreligionists gave our ancestors an advantage in the struggle for resources.
From NY Times review: http://www.nytimes.com/2009/12/27/books/review/Shulevitz-t.html?pagewanted=all