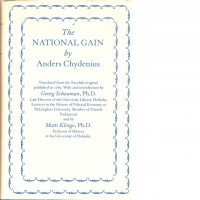 
Translated from the Swedish original of 1765

In 1765 Chydenius published a pamphlet called The National Gain, in which he proposes ideas of free trade and industry, explores the relationship between economy and society, and lays out the principles for liberalism, capitalism, and modern democracy.[2] In the book Chydenius published theories closely corresponding to Adam Smith’s invisible hand, eleven years before Smith published his book, The Wealth of Nations.

Chydenius also put his theories into practice by proposing to the Riksdag of the Estates a drastic trade liberalization of towns along the Gulf of Bothnia. However, most of his other propositions were not realized, such as turning Lapland to a nightwatchman state to make the poor province prosper economically:

” – free state, private ownership and individual freedom. Inhabitants could choose whatever profession, freedom of trade would be complete, there would be no privileges, regulation or taxes. Bureaucracy would be nonexistent, and the only officer would be a judge who would oversee that no-one’s rights would be suppressed.”