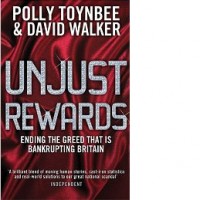 Unjust Rewards: ending the greed that is bankrupting Britain


The rich are getting richer and the poor are getting poorer. In this urgent polemic, Guardian journalist Polly Toynbee and the Guardian’s economics editor David Walker present a worrying portrait of Britain today. Their gripping investigation takes them to the editor of Tatler, who bemoans paying private school fees on a middle class salary and to young city lawyers who justify earning 100 times more than teachers because they work so hard. Polly Toynbee and David Walker shred the myth that executives require astronomical salaries, and put the case for higher taxation of the very rich. This was once the heart of Labor ideology, but politicians now seem almost embarrassed to raise the subject. Toynbee and Walker demolish the arguments against higher taxation, and show how government policy could revitalize British society. “Unjust Rewards” sets the agenda for the next general election.