Kay was educated at the Royal High School, Edinburgh University, and Nuffield College, Oxford. He has been a fellow of St John’s College, Oxford since 1970, and lectured economics at Oxford from 1971 to 1978. In 1979, Kay became Research Director and the Director of the independent think tank, the Institute for Fiscal Studies.In 1986 he became a professor at the London Business School and founded London Economics, a consultancy firm. He was the first director of Oxford’s Said Business School from 1997 to 1999, and has written at some length as to why he chose to resign after only two years. He has served as a director of Halifax plc and of several investment companies.

Kay (2003), addressed to non-economists, attempts to answer what Robert Lucas has called the most exciting economic question: across the globe, why are so few rich and so many poor? 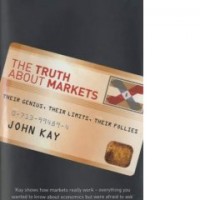 The Truth About Markets: Their genius, their limits, their follies