Muhammad Yunus is a Bangladeshi economist and founder of the Grameen Bank, an institution that provides microcredit (small loans to poor people possessing no collateral) to help its clients establish creditworthiness and financial self-sufficiency. In 2006 Yunus and Grameen received the Nobel Peace Prize.Yunus himself has received several other national and international honors.

He is a member of advisory board at Shahjalal University of Science and Technology. Previously, he was a professor of economics at Chittagong University where he developed the concepts of microcredit and microfinance. These loans are given to entrepreneurs too poor to qualify for traditional bank loans. He is the author of Banker to the Poor and two books on Social Business Models, and a founding board member of Grameen America and Grameen Foundation. In 1996, Yunus introduced mobile phones to rural villages. Grameen Intel is just one of hundreds of public and private partnerships now mediated through Youth & Yunus. In early 2007 Yunus showed interest in launching a political party in Bangladesh named Nagorik Shakti (Citizen Power), but later discarded the plan. He is one of the founding members of Global Elders. 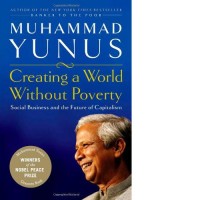 Creating a World Without Poverty: Social Business and the future of capitalism