Oliver Wolf Sacks, CBE (born 9 July 1933, London, England), is a British neurologist and psychologist residing in New York City. He is a professor of neurology and psychiatry at Columbia University, where he also holds the position of Columbia Artist. He previously spent many years on the clinical faculty of Yeshiva University’s Albert Einstein College of Medicine.

Sacks is the author of numerous bestselling books,[1] including several collections of case studies of people with neurological disorders. His 1973 book Awakenings was adapted into an Academy Award-nominated film of the same name in 1990 starring Robin Williams and Robert De Niro.[2] He, and his book Musicophilia: Tales of Music and the Brain, were also the subject of “Musical Minds”, an episode of the PBS series Nova. 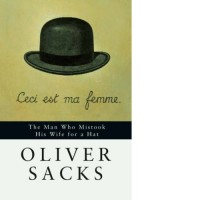 The Man Who Mistook His Wife For A Hat, and Other Clinical Tales