Robert Bernard Reich is an American political economist, professor, author, and political commentator. He served in three national administrations, including that of Presidents Ford, Carter, and as Secretary of Labor under President Bill Clinton, from 1993 to 1997. Reich is currently Chancellor’s Professor of Public Policy at the Goldman School of Public Policy at the University of California, Berkeley. He was formerly a professor at Harvard University’s School of Government and professor of “Social and Economic Policy” at Brandeis University. He has also been a contributing editor of The New Republic, The American Prospect (also chairman and founding editor,) Harvard Business Review, The Atlantic, New York Times, and The Wall Street Journal. 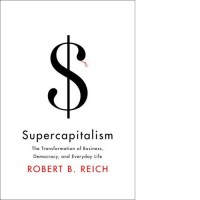 Supercapitalism The transformation of business, democracy and everyday life