Benkler received his LL.B. from Tel-Aviv University in 1991 and J.D. from Harvard Law School in 1994. He worked at the law firm Ropes & Gray from 1994-1995. He clerked for U.S. Supreme Court Justice Stephen G. Breyer from 1995 to 1996. He was a professor at New York University School of Law from 1996 to 2003, visiting at Yale Law School and Harvard Law School (during 2002-2003), before joining the Yale Law School faculty in 2003. In 2007, Benkler joined Harvard Law School where he teaches and is a faculty co-director of Harvard’s Berkman Center for Internet & Society and is on the advisory board of the Sunlight Foundation. In 2011, Benkler received the $100,000 Ford Foundation Visionaries Award.

Benkler’s research focuses on commons-based approaches to managing resources in networked environments. He coined the term commons-based peer production to describe collaborative efforts, such as free and open source software and Wikipedia which are based on sharing of information. He also uses the term networked information economy to describe a “system of production, distribution, and consumption of information goods characterized by decentralized individual action carried out through widely distributed, nonmarket means that do not depend on market strategies.” 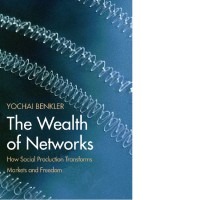 The Wealth of Networks