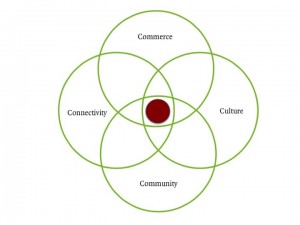 Great article about the Spanish crowdfunding platform Goteo.org. That builds upon my principle that our future is bound up in the model of the 4C’s Commerce, Culture, Community, Connectivity.

We are reinventing social and cultural practices. By necessity and desire. New ways of collaborating require, not the least, new ways of organizing financial means. In the cultural sector, commercial models based on copyrights (selling copies) and government funded models (subsidies) are in crisis and are increasingly inadequate or politically unsustainable.

This is the core principle behind Goteo

Goteo’s approach is that crowdfunding should also imply crowd benefits or community benefits, if you prefer. These benefits might be social, educational or economical in character. We want to look at these things together, rather than as different dimensions separated from one another. Thus, our projects need to have a strong connection to the commons.

Goteo establishes, together with producers, lawyers, economists and fiscal experts, a simple, effective tool for both donors and recipients to make transparent the core principles they are committed to in the project and how these lead to reinforcing the commons and assuring shared community benefits. This question of sociability is really about developing the skills of interacting well with others, on a peer-to-peer basis.

A central question is how do we generate a new economy and realize the potential of collective production? We need to go beyond the co-creation standards of the industry. We want to ensure that innovation is distributed. So we want to combine crowdfunding with crowdsourcing in a way that does not simple help private companies to improve their products.

Rather, co-design should imply opening up to contributors the processes of micro-entrepreneurship, micro-distribution, micro-production. In other words, everyone who contributes to a project should become part of the economic/productive/creative process they helped to improve, rather than support the generating of knowledge and resources for a private party.

An example of a fertile territory for such a development is open hardware or the emerging open craft movement, which is growing particularly fast. If we can get to the point where backers or donors of a project end up being the future producers or providers for the community or find their way to be actively part of the project they helped, this is when we really open the circle of sociability!

Twenty-five projects have been fully funded and supported so far, and Goteo has raised more than 100,000 euros and around 400 offers of different type of collaboration.

Goteo demonstrates a people / community centered design approach to getting stuff done, bottom up networked, where everyone has something to give and something to gain. If we are looking for a pattern one can also point to Mosaic Banking on the sun, a community investing in sustainable energy. Collective crowdfunding is also part of a global movement to go around those institutions that people believe have failed them. Embedded in such design is a philosophy of networked sociability, and trust. As none of this works without it. It points to an alternative model of funding local projects which also mitigates risk.