Ecuador planning a commons based economy 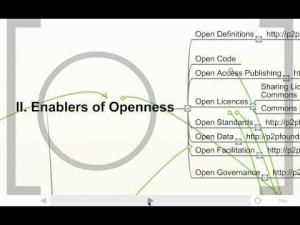 In 2005 I was in Amsterdam talking about a more participatory culture, and participatory economy, where I met a man called Michel Bauwens. Michel had set this thing called the peer-to-peer foundation and was publishing on a wiki.

Over those years I have watched that wiki grow and seen Michel evolve and develop his thinking, seen a philosophy evolve around a more humane way of thinking about how we go about our business in the world, what education and healthcare might like and the shape and nature of our economies. Our work crosses over in this context. I like to say that natures default setting is open, and, openness is resilience.

They also say that disruption never comes from the centre, it always comes from the edge, from places where thinking and doing differently has greater flexibility. Perhaps it will not be the power houses of the industrial order where real and meaningful change comes from but elsewhere. So it was no surprise that the Government of Ecuador has launched a major strategic research project to “fundamentally re-imagine Ecuador” based on the principles of open networks, peer production and commoning, and have Michel to be deeply involved in that process. The project seeks to “remake the roots of Ecuador’s economy, setting off a transition into a society of free and open knowledge.”

The announcement of the project and Bauwens’ appointment was made on Wednesday by the Free/Libre Open Knowledge Society, or FLOK Society, a project at the IAEN national university that has the support of the Ministry of Human Resource and Knowledge in Ecuador.  The FLOK Society bills its mission as “designing a world for the commons.”

It seems Ecuador has been thinking about this for a long period of time, a report was published that explores what an alternative economy might look like and on what principles that economy would be based. In the National Plan for Good Living, 2009-2013 (pdf file). Bollier writes, The Ecuadorean  development report does not focus on juicing up economic growth, exploiting nature and privatizing public resources, but on the idea of bien vivir, or “good living.”

Here is the official announcement released by the FLOK Society earlier this week:

In the first semester of 2014, Bauwens will assist in setting up a global network of transition researchers. The P2P Foundation is a global network of researchers that is documenting the shift towards open, participatory and commons-oriented practices in every domain of human activity, but especially also the shift from collaboration on open knowledge and code, towards cooperation in open design, open hardware, open science, open government, and the shift towards open agricultural and open machining practices that have great potential for increasing the productivity and sustainability of farming and industrial processes.

Ecuador is the first country in the world which is committing itself to the creation of a open commons knowledge based society.  In order to achieve the transition to a buen saber, or ‘good knowledge’ society, which is an extension of the official strategy towards a buen vivir-based society, the Advanced Studies Institute (IAEN by its Spanish initials) in Quito, Ecuador, led by the rector Carlos Prieto, has initiated a strategic process, called the FLOK Society Project, which aims to organize a major international conference in March 2013, and will produce 10 strategic documents proposing transition policies towards the good knowledge society, which will be presented to the Ecuadorian citizens through intensive participatory processes, similar to those that took place for the establishment of the new Constitution and the ambitious National Plans, which set the guidelines for government policy.

Michel we wish you well!