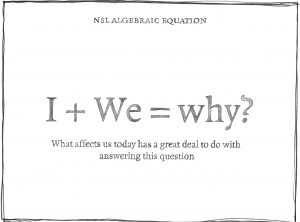 Det beste er ikke for godt which translates to Not even the best is good enough, was the motto of the founder of LEGO – that commitment to quality provided for many profitable years. Lego grew, and was loved by a global audience, it certainly was much loved by me.

But suddenly, and unthinkably, Lego was hemorrhaging cash after several years of increasingly heavy losses. By January 2004 LEGO had a deficit of Dkr1.4bn (£144m). And its debts amounted to more than Dkr5bn. There was even speculation that the Kristiansen family would be forced to sell, or large parts of it, to an all-American, plastic-fantastic interloper such as Mattel. All Denmark mourned.

So what happened? The LEGO people got medieval on looking at the problem – they embraced it and started to understand that that they needed to rethink how they created relevant and valuable products that would sell. They learnt the hard way. Susan Fournier wrote in 1996,

It’s startling how wrong we’ve been in what it takes to cultivate intimate relationships with customers. And alarming how quickly and thoughtlessly relationships can be destroyed through the muddled actions we engage in.

This point was made repeatedly and discussed in the company. They realised they had to listen deeply to their customers, and that together they could co-create a successful future. In fact to to co-create with their most ardent critics – their most ardent and passionate fans.

But to co-create requires trust, it requires knowledge in HOW to engage, and to treat customers as people not as some metric on a slide rule. There are no conscripts in the networked society, only volunteers, said Peter Drucker, and he additionally observed  that coercion is a very poor way to inspire people to deliver their very best work.

Today, the Lego System of Play which started humbly as a set of bricks, a few tyres, and some windows has evolved into a goal to integrate physical and virtual play and to create a new operational/commercial model that has integrated its customers into that model via initially the factory.lego.com.

While the rest of the corporate and commercial world slept, LEGO was hard at it learning that there existed a better, more agile, more sustainable, more relevant model for an organisation in today’s world. So we have arrived at a model where customers, are designers, co-creators, who share in revenue. LEGO has connected to and become part of the LEGO community – the LEGO community has become part of LEGO.

And that process is still evolving

In 1998 Kohei Nishiyama founded a company that would years later form what is called LEGO CUUSOO. The official blog for CUUSOO writes,

With the introduction of the Design-To-Order process in 1998, CUUSOO.com has become a pioneer of user innovative product design. Since 2008, CUUSOO.com has been partnering with The LEGO Group to create a user innovative design system for people to create and market their own LEGO sets in the Japanese market. This revolutionary business model allowed an amateur user with a passion in deep sea exploration to create the world’s first official LEGO set not designed by a professional – the Shinkai 6500.

So far, the LEGO CUUSOO service has been available in Japan only, with sets produced by LEGO for sale in Japan only. While we are pretty happy about our accomplishment in Japan, we know fans of LEGO around the world are eager to use our system to create their own sets, perhaps even a new series! This is why today, we are extremely excited to present to the world the new, international version of LEGO CUUSOO! (in Beta!)

We’ve worked pretty hard on this for a little over 2 months, putting in just the basic required features that will allow you to create and share your LEGO ideas and creations with others. From here on, we’ll be working closely with all of you, listening to all your feedbacks and improve the system to better suit your needs. So, if you haven’t yet, go and check out the site at http://LEGO.cuusoo.com. Registration is by invitation only for now but please leave us your e-mail and follow us on Twitter and Facebook, so we can send invites to you when we’re ready. We can’t wait to see what you can create for LEGO!

This is interesting because of the trend also towards ‘maker-friendly‘.

Below is a little video and prezzi – pres on CUUSOO

So looking at LEGO from an NSL perspective what can we learn from this story?