The French Intifada and the crisis of modern identity 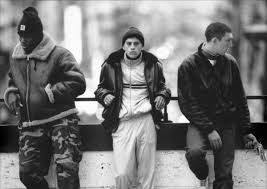 In No Straight Lines I explore what is called the crisis of of the modern world. The crisis of identity. Who are we? Why do we exist? What makes meaning, identity, community and connection? This crisis impacts our communities our organisations (think The Office), our wider society and even nations. What have we become? I present a challenge I+We=Why? It touches every touch point in our lives and is having serious ramifications on how our societies are evolving. E.O Wilson wrote that we yearn to belong and to have a purpose bigger than ourselves. Without that purpose we lack meaning, and context, custom and tradition wane – yet we are meaning making creatures.

Some prefer to reduce this to ‘us and them’, UKIP, Golden Dawn, Islamic or Christian fundamentalism, yet the truth is without identity and connection and meaning we become a ghost army rattling around in a machine called Life.

I reflected on this whilst reading a story about what they call the French Intifada,

In recent years this core value of the French republic has been opposed by communautarisme, which sets the needs of the “community” against the needs of “society”. Again, the loose Anglo-American model, where “difference” – whether of sexuality, religion or disability – is tolerated or even prized, does not apply in France, where “difference” is seen as a form of sectarianism and a threat to the republic. The most acute problem for the recent generations of Muslim immigrants to France is that the proclaimed universalism of republican values, and in particular laïcité, can very quickly resemble the “civilising mission” of colonialism. In other words, if Muslims want to be “French”, they must learn to be citizens of the republic first and Muslims second; for many this is an impossible task, hence the anxieties over whether Muslims in France are musulmans de France or musulmans en France.

And here we have the point about identity

But this conflict is not just about politics or religion. It is also about extreme emotions. More than death, most human beings fear annihilation. This is a process familiar to psychiatrists who treat patients for disorders such as schizophrenia and depression. Part of the process of mental disintegration that characterises those illnesses is the experience of partial or total alienation. When a person loses all sense of authentic identity, all sense of self, to the extent that they don’t feel that they properly exist, they then become literally strangers to themselves.

Historically this is what happened in France’s territories during the colonial era and what is happening now in the banlieues. This is why it is almost impossible for immigrants to France from its former colonies to feel authentically “at home” there. For all their modernity, these urban spaces are designed almost like vast prison camps.The banlieue is the most literal representation of “otherness” – the otherness of exclusion, of the repressed, of the fearful and despised – all kept physically and culturally away from the mainstream of French “civilisation”.

Humanity please check the engine: In Loneliness: Human Nature and the Need for Social Connection, John T. Cacioppo and William Patrick delve into what they call the invisible forces that link one human being to another and see something profound. Their research tells us that our brains and bodies are designed to function in a collective and networked fashion, not in isolation. That is, they say, the essence of a social species. So our attempt to function as autonomous individuals, as ‘I’ in denial of our need to be ‘We’, violates our design specifications. The warning light for humanity is on, ‘Social connection is not just a lubricant that like motor oil, prevents overheating and wear, social connection is a fundamental part of the human operating and organising system itself.

So in these conditions people will fight back to restore, redefine, find or challenge identity. Political scientist Gilles Kepel argues that,

the crucial conflicts in the banlieues is the challenge to the French republic from the “outside”, by which he means both the banlieues and France’s former territories in the Muslim world. Most importantly, unlike many of his peers, he sees the recent changes in French society as intimately connected to events in the Arab world which are little understood in the west. “Many French political commentators are blind. They do not want to see the world beyond France. And so they do not understand that what happens here is because of our relationship with the Arab world, and our history there.”

Thinking about the film LaHaine, outcasts often have bravado in one hand and abject fear of the world around them in the other. For many of us, living in a world where our identities are not constructed and defined by tradition, customs and geography, as in the immediate external forces around us, we undertake, a tricky quest for self-identity. This is described as psychological self-determination, the ability to exert control over the most important aspects of our life, especially personal identity, which becomes the source of meaning and purpose in a life no longer dictated by geography or tradition. This quest in fact dominates our lives, because without an identity we do not exist. And as Erik Erikson wrote, the concept of identity is inextricably connected to its social context.