The journey to a commons based economy 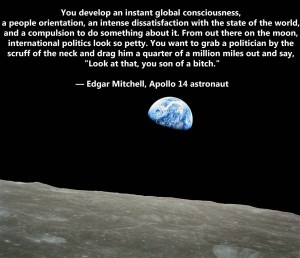 When astronauts go into space and looking down at the earth, an image we all know, but in another way do not know at all. They find themselves having a deep spiritual connection with the earth, within themselves that is shocking and beautiful. Theirs is a profound moment of epiphany – a realisation, of the inseparable relationship between the cosmos, the Earth and humanity. This is not a ‘oooh woow’ moment, it is in fact a moment of transformation, of catharsis, an irreversible cognitive shift.

This experience is called the overview effect the moment of seeing firsthand the reality of the Earth in space, which is immediately understood to be a tiny, fragile ball of life, hanging in the void, shielded and nourished by a paper-thin atmosphere. Again, and again astronauts talk about the overwhelming almost indescribable beauty, and that the sun, the moon and the earth our universe, us, are all made from the same atomic stuff. We are all interconnected at the level of atoms. That the earth is one system, we are all part of that system and that there is a certain unity to it all, which also has implications for us all.

Edgar Mitchell, scientist, astronaut and lunar pilot from the first lunar landing, experienced this transcendental moment. He wanted to understand it better, more deeply. Retuning to earth, Mitchell sought out literature that might explain what was to him profound, life changing, even sacred. He found an explanation, not in modern religious or scientific texts but in ancient literature. The term used was salva corpus amanti, this is Mitchell’s interpretation of this phrase,

You see things as you see them with your eyes but you experience them emotionally and viscerally as it was ecstasy and a sense of total unity and oneness. The molecules in my body and the molecules in my partner’s bodies, and in the spacecraft had been prototyped in some ancient generation’s stars. In other words, it was pretty obvious… we’re all stardust.

From space, the astronauts tell us, national boundaries vanish, the conflicts that divide people become less important, and they feel an overwhelming need to create a planetary society with the united will to protect. This becomes both blindly obvious and imperative. They speak of unity, rather than disunity. They speak about humanity rather than nationality, acquiring a deeper insight into what unity really means.

Leading a life of purpose: Consequently, many astronauts come home with the purpose and conviction that they must contribute to the future of both the natural world and humanity. They have what is termed a calling. This calling is what it takes they say to build a civilization, their calling is an incessant striving of a better way to live, to exist.

Towards a commons based economy: So if we want to thrive on this planet, our source of finding a new pathway to a restorative and regenerative society is the ability to see our world as an interconnected whole, everything is connected to everything else. We need to see our world as a living system, we need to understand that humanity is a living system too, deeply interconnected with natures systems. The reality is no living system is an isolated system. We all ride flows of matter, energy and information. So it is absurd to persist in chopping our world into ever smaller bits in an attempt to manage our world like a set of maths questions, and that by some how quantifying everything, testing efficiency in a failing system provides better insight and the means to better manage. This has been our downfall.

We find understanding systems as too complex, and so we simplify models in order to better manage them – this has created a deconstructed world, and a disconnected world – for all life systems, for humanity and nature.

The central question is how can we get to this commons based society? The one that all those astronauts realized was the right one as they experienced their salva corpus amanti? The answer – we need to take an integral view of how, this commons based, living, restorative system might work. Ground up, we need to move through the various parts of our world to understand how they join up together that eventually brings a redefinition of unity that stimulates people to take initiative providing the means to redesign around our human capacity to thrive and for our natural world to thrive too. We need to explore new effective pathways to that end.

One Response to The journey to a commons based economy