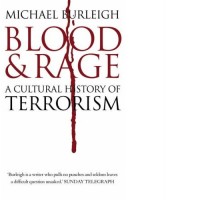 
Burleigh (Earthly Powers), one of the leading English-language scholars of the role of ideas in the modern world, makes another major contribution in this pull-no-punches cultural study of terrorism as it has been lived and practiced for a century and a half. Burleigh sees modern terrorism’s roots in the mid–19th century, with the emergence of the Irish Fenians, the Russian nihilists, the Western anarchists who used fear induced by violence to compensate for their lack of political power. Their tactics were adopted in the mid–20th century by movements seeking decolonization, like the Palestinian Black September, Italy’s Red Brigades and Germany’s Red Army Faction. By century’s end, terrorism further mutated into a tool for marginalized local nations like the Basques. Most recently, terrorism has become identified with what Burleigh calls the world rage of Islamism. Burleigh’s case studies demonstrate mercilessly that terrorism is a career, a culture, and a way of life attractive for its own sake as well as its ostensible objectives. The terrorist milieu, the author demonstrates convincingly, is morally squalid, intellectually bankrupt and politically barren. Burleigh considers the lessons history has to teach us, though he eschews policy recommendations. (Mar.)
Copyright © Reed Business Information, a division of Reed Elsevier Inc. All rights reserved. –This text refers to an out of print or unavailable edition of this title.