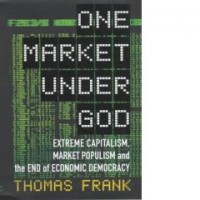 One Market Under God: Extreme capitalism, market populism and the end of economic democracy


After nearly a decade of bull markets, we have come to equate free markets with democracy. Never one for mincing words, social critic Thomas Frank, editor of The Baffler and author of The Conquest of Cool, challenges this myth. With his acerbic wit and contempt for sophistry, he declares the New Economy a fraud. Frank scours business literature, management theory and marketing and advertising to expose the elaborate fantasies that have inoculated business against opposition. This public relations campaign joins an almost mystical belief in markets, a contempt for government in any form and an “ecstatic” confusion of markets with democracy.

Frank traces the roots of this movement from the 1920s, and sees its culmination in market populism as a fusion of the rebellious ’60s with the greedy ’80s. The overarching irony is the swapping of roles–suddenly Wall Street is no longer full of stodgy moneygrubbers, but cool entrepreneurs “leaping on their trampolines, typing out a few last lines on the laptop before paragliding, riding their bicycles to work, listening to Steppenwolf while they traded”. Meanwhile, “Americans traded their long tradition of electoral democracy for the democracy of the supermarket, where all brands are created equal and endowed by their creators with all sorts of extremeness and diversity”. Frank’s close reading of the salesmen of market populism nails such financial gurus as George Gilder, Joseph Nocera, Kevin Kelly and Thomas Friedman. Their writings, he contends, have served to make “the world safe for billionaires” by winning the cultural and political battle–legitimising the corporate culture and its demands for privatisation, deregulation and non-interference. Frank’s incisive prose verges on brilliant at times, though his yen for repetition can be exasperating. In either case, his boisterous reminder that markets are fundamentally not democracies is worth repeating as the level of wealth polarisation in America reaches heights not seen since the 1920s. –Lesley Reed