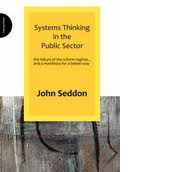 
Professor John Seddon: Seminal moments that informed the evolution of his systems thinking method from The Systems Thinking Review on Vimeo.

This waste of our money is just madness. Do you ever wonder how the Government came to make such a pig’s ear of running the public services…? The argument compellingly made in this book…is that the Government has designed failure into almost everything it does on our behalf… it is culpable because it has failed to listen to people who know better how to run services on behalf of the customer. Philip Johnston, telegraph.co.uk

The free market has become the accepted model for the public sector. Politicians on all sides compete to spread the gospel. And so, in the UK and elsewhere, there’s been massive investment in public sector ‘improvement’, ‘customer choice’ has been increased and new targets have been set and refined. But our experience is that things haven’t changed much. This is because governments have invested in the wrong things. Belief in targets, incentives and inspection; belief in economies of scale and shared back-office services; belief in ‘deliverology… these are all wrong-headed ideas and yet they have underpinned this government’s attempts to reform the public sector. John Seddon here dissects the changes that have been made in a range of services, including housing benefits, social care and policing. His descriptions beggar belief, though they would be funnier if it wasn’t our money that was being wasted. In place of the current mess, he advocates a Systems Thinking approach where individuals come first, waste is reduced and responsibility replaces blame. It’s an approach that is proven, successful and relatively cheap – and one that governments around the world, and their advisers, need to adopt urgently.