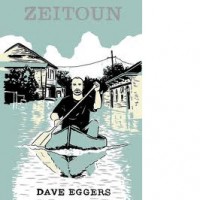 
After watching Newsnight review the other evening where the irritatingly self satisfied and smug reviewer panned this book I felt compelled to write a review. In total ignorance of the author Dave Eggers I bought this book in New York at Christmas where it had generated real controversy. The impact of the New Orleans floods has a strange and compelling fascination not least of all in terms of wider climate change impacts (let’s not even go near that controversy!) but also the incompetent reaction of the Bush administration and its treatment of the US black “underclass”.

This is a non fiction account of Abdulrahman Zeitoun an immigrant from Syria and his wife Kathy who in 2005 owned a successful house-painting business in New Orleans. When Katrina hits Abdulrahman stays behind to watch out for his property. Eggers was not present at the disaster but has essentially ghost written this book for the Zeitoun’s. And what a story it is. There are no great rants against Bush or the incompetent New Orleans authorities. Eggers doesn’t need to do this since the facts as presented are the most massive indictment in their own right and speak for themselves.

Without giving away the story what compounds this Kafka style nightmare for Abdulrahman Zeitoun is his Arab and Muslim heritage and the continuing rolling paranoia which still rumbled on from the aftermath of Al Qaeda’s savage attack on the twin towers. Add to this dark lens an exotic but poor city which prior to the floods had a byzantine range of problems and as the Levee’s break these spew out into the city. New Orleans then finds itself on the verge of collapse, extreme violence and break down. Cast your mind back to 2005 and the terrible, sinister and tragic atmosphere in the New Orleans Superdome, the wild rumormongering of Mayor Ray Nagin and the spectacle of a largely poor black community “left behind” .

Within the totality of this toxic mix Abdulrahman Zeitoun is a thoroughly decent human being who performed in his own way a range of little miracles. Those of you who have travelled the US will know the dangers of finding yourself caught in the wrong place at the wrong time. Zeitoun unfortunately experienced this in spades and Eggers charts this and the response of his wonderful family who had fled the city with pristine clarity and an emotional punch so hard it knocks you off your feet. He doesn’t resort to hyperbole but in simple sentences his description of a city that “smelled dirtier every day, a wretched mélange of fish and mud and chemicals.” or the constant helicopters making a “vibrating sky” he conveys vivid images.