John N. Gray is a British political philosopher and author, formerly School Professor of European Thought at the London School of Economics. Gray contributes regularly to The Guardian, New Statesman, and The Times Literary Supplement, and has written several influential books on politics and philosophy, including False Dawn: The Delusions of Global Capitalism (1998), which argues that free market globalization is unstable and is in the process of collapsing, Straw Dogs: Thoughts on Humans and Other Animals (2003), which attacks philosophical humanism, a worldview which Gray sees as originating in religious ideologies, and Black Mass: Apocalyptic Religion and the Death of Utopia (2007), a critique of Utopian thinking in the modern world.

Gray sees volition, and hence morality, as an illusion, and portrays humanity as a ravenous species engaged in wiping out other forms of life. Gray writes that ‘humans … cannot destroy the Earth, but they can easily wreck the environment that sustains them. 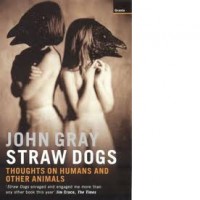