Neil Postman was an American author, media theorist and cultural critic, who is best known by the general public for his 1985 book about television, Amusing Ourselves to Death. For more than forty years, he was associated with New York University. Postman was a humanist, who believed that “new technology can never substitute for human values.” 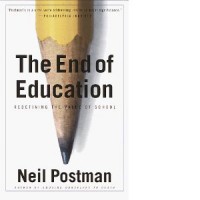 The End of Education: Redefining the Value of School