Pekka Himanen defines himself as a philosopher and a public intellectual. He studied philosophy (and computer science as a minor) at the University of Helsinki. In 1994, with his thesis on the philosophy of religion, The challenge of Bertrand Russell, he received his Ph.D. in philosophy from the same university, thus becoming the youngest Ph.D. in Finland.

He has done research work in Finland (University of Helsinki), the United Kingdom, and the United States (Stanford University, University of California, Berkeley) and has done field work in India, China and Japan. At UC Berkeley, Himanen directed the Berkeley Center for the Information Society, a research group under Berkeley’s International Computer Science Institute. The Center was active from September 2002 until 2005.

Himanen has also been a counselor to the president of Finland, Finnish government (including the Ministry of Education) and Finnish parliament, in the field of information society.[citation needed]

Currently, Himanen works as a Principal Scientist at the Helsinki Institute for Information Technology, where he leads a research project on global network society. He is also a Professor of Creative Economy at the University of Art and Design Helsinki, and has been a Visiting Professor at the Oxford Internet Institute (based at Oxford University) from September 2005 to July 2006. 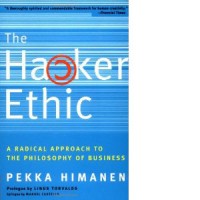 The Hacker Ethic: A radical approach to the philosophy of business