Stephen “Steve” Goldsmith is the former Mayor of Indianapolis and currently serves as the Deputy Mayor of New York City for Operations. He is also the Daniel Paul Professor of Government at the John F. Kennedy School of Government at Harvard University. He is a graduate of Wabash College and the University of Michigan Law School, and is an Eagle Scout and recipient of the Distinguished Eagle Scout Award. 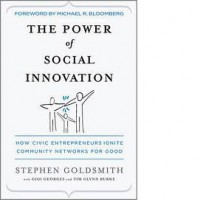 The Power of Social Innovation: how civic entrepreneurs ignite community networks for good.