wikipedia entry: http://en.wikipedia.org/wiki/Stephen_Levy
Levy is a senior writer for Wired. Previously, he was chief technology writer and a senior editor for Newsweek. Levy has had articles published in Harper’s, Macworld, The New York Times Magazine, The New Yorker, Premiere, and Rolling Stone. Levy has won several awards, including the “Computer Press Association Award” for a report he co-wrote in 1998 on the Year 2000 problem. In 1984, he wrote a book called Hackers: Heroes of the Computer Revolution, in which he described a “hacker ethic”, which became a guideline to understanding how computers have advanced into the machines that we know and use today. He identified this Hacker Ethic to consist of key points such as that all information is free, and that this information should be used to “change life for the better”. 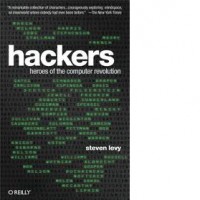 Hackers: Heroes of the computer revolution