Tony Robert Judt FBA (2 January 1948 – 6 August 2010) was a British historian, essayist, and university professor who specialized in European history. Judt moved to New York and served as the Erich Maria Remarque Professor in European Studies at New York University, and Director of NYU’s Erich Maria Remarque Institute. He was a frequent contributor to the New York Review of Books. In 1996 Judt was elected a Fellow of the American Academy of Arts and Sciences and in 2007 a corresponding Fellow of the British Academy. 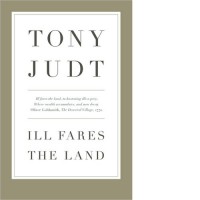