Achuar community speaks truth to power in the Amazon

MacLennan explains that huge tracts of the Amazon have been sold to international companies for mineral extraction. Those companies come and extract the minerals but they leave a lot behind: pollution on an unprecedented scale, deforestation, the undoable disruption of the communities that live there. The mining companies literally tear up and destroy the habitat in which the indigenous people live. Rather than wishing to protect the indigenous people of the Amazon, MacLennan says the government in Lima perceives them more as an irritant, so is quite content to let the destruction of its own people continue, as long as the world doesn’t know.

A new report has uncovered 90 oil spills by Pluspetrol in northern Peru’s Amazon rainforest over the past 3 years. Covering two oil blocs—1-AB and 8—the report, complied by the Federation of Indigenous Communities of the Corrientes River (FECONACO), recorded 18 major oil spills in 2011.

A few years back, the indigenous tribes, after extensively trying to get the Lima government to engage in dialogue about deforestation and the threat to their way of life, and without success, came together to protest at a logging station and refused to move. This went on for several months. But at some point the authorities’ patience snapped and they sent in the troops. Many people were brutally beaten, and killed. The government claimed it was putting down a terrorist attack: why would anybody believe differently? There was no evidence, no film crews, right? Wrong, two Dutch travellers filmed the event. They got to a local town with an internet connection and the murder and beatings of unarmed people now lives on YouTube.

This story demonstrates how powerful networked communications can be. MacLennan’s objective is to enable the indigenous tribes to speak their truth to the power in Lima, and also to the power that sits in the boardrooms of the companies that come and mine the land of the Amazon. This is how he does it.

Mapping the land that sustains life 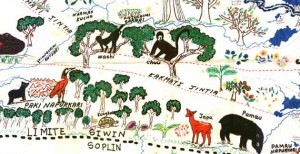 First, MacLennan gathers the entire village in the main house, and asks them to collectively pool their knowledge by drawing on a large sheet of paper the rivers where they fish, the land they hunt, the areas where they may grow crops or harvest the forest for its bounty – all the things that enable that tribe to flourish in the jungle. MacLennan and his team then teach the group to use GPS positioning equipment to turn the hand-drawn map that the entire village has contributed to creating into hard data. That information is then fed into survey maps of the area, which will not contain such detailed information. And so a new map is created. These maps are then presented to the government in Lima, to board directors and shareholders of mining companies, forcing them to accept that their actions can have tragic consequences to human life. The Achuar have also been trained to use video-recording technology, so evidence of the environmental damage that these extraction companies leave behind is also presented as prima facie evidence.

The mashup of data that combines the historical collective intelligence of the village, created initially with pens and crayons and perhaps the odd spot of paint, and is then translated into millimetre perfect maps is transformational. These maps are causing companies to think harder about how and where they are going to mine in the forests of the Amazon. It certainly has changed the power relationships between the ‘savage’ people of the rainforest and the ‘cultured’ people of Lima, or should that be the other way around?

Home or block 64? In 2012 Talisman Energy (TLM) announced its decision to cease oil exploration activities in the Peruvian Amazon and to exit the country. Despite Talisman’s claim of attaining local support from communities and signing good neighbor agreements with 66 communities downriver from their operations, the company never had the consent of the majority of communities living within Block 64.

This is an extract from No Straight Lines .