In Chapter 8 – NSL explores why the concept of hacking – the means of exploring new ways of dealing with significant challenges is a key aspect of moving towards building better societies, organisations and economies. This chapter joins up the dots of the 6 principles of No Straight Lines. 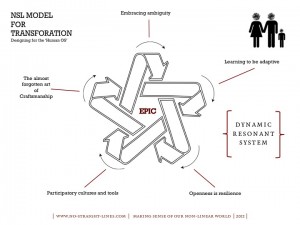 Hacking the future: to be part of the future you have to create it

For organisations, commercial and non-commercial alike, they are now faced with a design challenge, what is it that comes next? What does next look like and how do we create it? These are all very pressing questions. And of course, depending on levels of literacy and knowledge, will determine whether this participatory reconstructed world is perceived as a form of Communism as Steve Ballmer of Microsoft did, or defined as one built upon mutuality. All organisations will face different challenges in different ways; there are of course parallels but each alternative successful solution whilst adhering to common principles will be as different as the examples shared in No Straight Lines. The big challenge for all industrial organisations is that they are designed to operate at 100% efficiency – all the time, which is fine when everything else around you is in synch. But when everything is not in synch then running at 100% efficiency means there is no time to explore what next looks like. The net result an irretrievable road crash out of which few survive, as an increasing number of organisations and governments are discovering.

So we need the craftsman’s approach to learning: the ability to play or experiment with an enquiring mind, an ability to bring together two unlikes in close adjacency and creatively explore what new forms of possibility might look like. To be happy to see stuff not work out as planned, and rather than seeing this as a personal (moral/intellectual) or departmental failure, to learn from that experience; in fact testing to destruction is as important as success. This exercise however is a cognitive act. Organisations cannot farm this stuff out; they need to create the future if they want to exist in it. They are the actors which need to act. They need to explore what the future looks like to them. And the reason why this is important is because when we can’t afford business as usual, and when we are currently in a cycle of almost continuous change, we are going to have disrupt ourselves before someone else does it to us.

Hacking as a term was first attributed to Stephen Levy as described in his book Hackers: Heroes of the Computer Revolution. The key points of this ethic are that of access, free information and improvement to quality of life. There are a couple of key points worth sharing. First, sharing is expected within the hacker culture and the principle of sharing stemmed from the atmosphere and resources at MIT. During the early days of computers and programming, the hackers at MIT would develop a programme and share it. Secondly, many of the principles and tenets of the Hacker ethic contribute to a common goal – the hands-on imperative. As Levy states: ‘Hackers believe that essential lessons can be learned about the systems – about the world – from taking things apart, seeing how they work, and using this knowledge to create new and more interesting things.’

Thirdly, a common value for hackers and their work processes is that a sense of community and collaboration are present at all times. In ‘Civic hacking: a new agenda for e-democracy’, James Crabtree references reciprocity. ‘The opportunity is the construction of a civic space in which citizens talk to each other, rather than to the state’, he states.

An analogy will help explain this. If you are stuck in a computer game, what do you do? Gamers today – and remember around three in ten people play computer games – will go to a gaming community online, and ask others for advice. They will almost always find someone willing to help them overcome the challenge. Other gamers will help for a variety of reasons: they may get respect for their knowledge; their standing in the community will improve; or they may simply be in a good mood that day. But mostly they do it on the principle of reciprocity.[2]

And as Crabtree points out, hackers tend to work collaboratively. So sharing information is the key to development; the more sharing of knowledge within communities of interest or practice means that community, like a Linux, or an   or a Local Motors community, becomes more capable – it can accelerate innovation, it can enable people to acquire new skills to apply to new challenges. Sharing good knowledge within a community is also creating a reservoir of knowledge – we are harnessing collective intelligence.

What is harnessing collective intelligence?

It was Eric Raymond in his famous article The Cathedral and the Bazaar who shared with us the insight that ‘with many eyes all bugs are shallow’.What he meant was, as in the case of the Linux open source code, where many people are able to contribute their individual knowledge to a coding problem collectively – the ability to solve that problem rises exponentially. This process is also described as co-creation, an idea whose time has now come and moved centre stage. The result of the open source approach to harnessing and applying the knowledge and collective wisdom has been proven repeatedly in the fields of science (NASA Mars project, and Galaxy Zoo in the UK), R&D (Innocentive, a platform for solving scientific challenges, and YourEncore – a collaborative R&D platform), commercially with Local Motors in the US, TopCoder and politically with Ushahidi. These are but a small sample of a much bigger list.

The hacker ethic and pattern recognition

In chapter 8 – No Straight Lines explores peer-to-peer entrepreneurial learning, innovation in healthcare, political institutional design, farming and agriculture, crisis management and even the plight of the Achuar tribe in the Amazon.

All the examples are relevant because they all faced various crisis situations that were so volatile they presented a deadly endgame. It was the ability of the entrepreneurs or groups of dispersed individuals or situated communities to apply innovative thinking and action that enabled them to adapt to ambiguous, challenging and dangerous situations. They were able to identify a new pattern, a new way of doing things – which was not seen as risky, but eminently doable. Consequently they have all transformed aspects of healthcare, economies, society and politics. There is indeed artfulness, an underlying creativity that is able to operate because the creators have all allowed themselves to imagine what others thought to be impossible. Not because they think it’s a nice thing to do, but because there was a very pressing need – in essence all obstacles must be overcome. They had to design for transformation.

So in hacking the future we must ask important questions, for example: How do we remove the acute volatility and therefore risk of running large scale farms by thinking about the problem as a systems challenge? How do we discover a new sustaining business model by enabling our customers to constantly co-create the future of our company, meaning we co-create better products, services, and increase revenues? How do we create a service to better manage people’s chronic healthcare. Reducing; wrong diagnosis, over prescription of drugs, clogging up hospitals and specialist time? How do we rapidly build a platform that can take eye witness accounts of atrocities and crimes against humanity and deliver this information as text, pictures, eyewitness accounts, with Geo-location and time tagged data to help build a comprehensive story of an unfolding crisis – with no money, no time and no infrastructure?

Compare that approach to the institutionalisation and the accompanying waste to innovation in many organisations and industries, populated by a culture that simply would not allow ‘heretical’ thinking, constrained by conventional orthodoxies, siloed budgets, misaligned needs and wants all wrapped up with a struggle for power.

In 2006 IBM produced a report called ‘The enterprise of the future’. Their survey of CEOs revealed that 8 out of 10 CEOs saw significant change ahead and yet the gap between expected levels of change plus the ability to manage it had tripled. Why? Because, I would argue in part, these leaders did not have the means to understand, embrace, nor articulate the emergence of a new world defined by new organisational structures, legal frameworks, systems thinking, new production and design processes, ways to attract highly motivated individuals, that brought into this world better capabilities and new skills. Which all add up to a new philosophy and defined by a new language. And, of course, the reality is that it is not only business which is feeling the impact of a new way of living unfolding and decoupling from the dying system of our industrial age.

In this non-linear world, companies and organisations premised upon the old orthodoxies, linear, industrial-scale models must think and embrace the unthinkable and work out how they innovate to survive. Whether we survey the political, media, engineering, NGO, educational or healthcare landscape we can identify an increasing sophistication in how we are responding to the challenges of living in a more complex world. At the same time, there is the ever-increasing acceleration of the collapse of the old ways of command and control. Every work of art, said Wassily Kandinsky, is a child of its time.

So it’s time to think the unthinkable, whether the challenges we face are commercial or let’s say are civic in nature, small or large scale, the ability to resolve those challenges by a framework that is more holistic and open, more focused on service-orientated solutions does provide us with the means to imagine an alternative approach that is more humane, more sustainable and potentially a lot less costly. Technology is important, digital low-cost communication tools can be powerful enablers, legal frameworks and networked thinking are of equal importance, but it is critical to remember that although the world is increasingly brought together by digital communication tools, the lessons of non-linearity, for example, demonstrate it is the intelligent and creative blending of all these things together where true long-term success lies. Humanity is in a constant state of evolution, and now we have the means to progress, where we can tread more lightly, and provide a more sustainable future both for the sake of this planet but also for humanity, which has over the last 150 years paid a heavy price for our fast-paced industrialised world. As I pointed out earlier, throughout large swathes of our world we have become more machine like than perhaps we understand, and I make the case that as a species we are rebelling against living our lives as constructs of the machine age that can no longer support us. It is time to hack the future.

No Straight Lines looks at how we can build better more sustainable societies, organisations and vibrant economies through innovative practice. It argues we need to design and create for the needs of humanity not industrial systems.

One Response to An introduction to hacking the future