Austerity Britain, so what comes next? 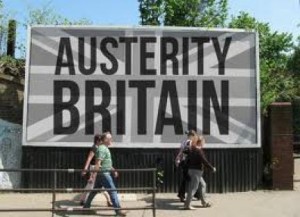 In the age of austerity it is called divesting –              Sir Merrick Cockell, chairman of the Local Government Association, said local authorities will have lost a third of their budget by 2015. And this is going to have serious implications for us all. A survey of 81 councils by the Guardian reveals communities around the country will be hit, with arts and sports budgets slashed, youth centres closed and support for thousands of vulnerable people withdrawn as authorities struggle to deal with a growing financial crisis. For more detailed information. Once you dismantle the state there is no going back.

From my country of Cambridgeshire, figures, based on conservative estimates, show that unless the funding crisis is addressed, a £153 million funding shortfall will exist by 2017-18 between current estimates of the amount of money available to Cambridgeshire County Council to provide its full range of services and the predicted cost of maintaining them at the levels wanted.  Core funding from Government has reduced from £140 million for 2010/11 to £107 million for 2012/13, with further reductions expected. The analysis is part of a wider report by the Local Government Association (LGA), which represents 373 councils in England and Wales. It warns that in order to manage a £16.5 billion shortfall that councils across the country may face by the end of the decade, funding for many service areas may have to reduce significantly.

The comprehensive welfare and municipal services of the pre-austerity years are unlikely to return: The Guardian reports that Newham council in east London, for example, has introduced a series of policies aimed at building what it calls “personal and community resilience“. These include a jobs programme for local unemployed people, free school meals for all primary schoolchildren, and the Every Child a Musician programme which offers a free musical instrument and two years of tuition for all year-five and year-six pupils in its primary schools. Other boroughs, such as Islington and Southwark, and the Welsh government, fund universal free school meals in primaries, arguing that this delivers wider and longlasting academic and health benefits for pupils. Similarly, Blackpool council is piloting a free breakfasts scheme for all its 12,000 primary school children. In their different ways, these projects, along with attempts to protect Sure Start programmes and parenting schemes, are bold attempts to deploy shrinking resources strategically to help residents to develop skills and resilience to cope with the pressures of austerity. It is not enough to simply say I can live on £53 a week and poor people are all scroungers.

Austerity alone cannot create a roadmap for a better future: The impact of the financial crisis on Europe reports Bank of England Director Andrew Haldane is the equivalent of the devastation of a World War impacting possibly several generations to come. There are consequences to this,  yet the question we must ask is are we dismantling certain aspects of the welfare state because we cannot afford it or because, its redundant in its design or is it conservative ideology? Reality is The UK faces a social and economic design challenge and we need to find a way to describe a new destination of what that looks like. We need creative entrepreneurial expression and a programme of innovation to help us explore what that next destination looks like.