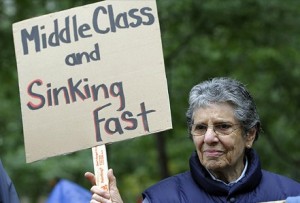 I have been reading David Boyle’s new book Broke. How to survive the middle-class crisis. Which had left me feeling quite down in the dumps, as it is the sad tale of the demise of a way of life that has significant implications for the future economy and culture of Britain.

But it is to the last chapter that I turn. Gonzalez de Cellerigo was a lawyer and an economist living in 1600 Spain. He writes, the riches which should have brought wealth have brought poverty. Cellerigo understood that the flood of money coming into Spain, over the last 4 decades had caused the value of money to fall. Boyle makes observation that in modern Britain today we have suffered the same, ‘the cascade of wealth into the City of London, instead of financing production, it was frittered away on interest payments for debt, buying luxury goods from abroad, raising prices and, in the case of sixteenth century Spain, on the purchase of Eastern luxuries from the Portuguese Empire’.

Middle-income Britain has lost out in the last three decades to the super-rich and middle-class professionals. BBC.

Boyle makes the point that the business of money for its own sake, including increasing sophisticated financial instruments to make more money prices other productive businesses out of existence. It was ruinous for Spain. Columbus apparently made his men go to confession before they collected their pay. How the world has changed. So a tiny elite emerges to manage wealth previously unknown in Spain, it fixates on power, whilst eroding its previous thriving economic base. The consequences were the destruction of the middle classes, with an ever widening gap between the very wealthy, and a middleclass that was falling into poverty and dependence. Cellerigo writes,

Our commonwealth has come to be an extreme contrast of rich and poor, and there is no means of adjusting them to one another. Our condition is one where there are rich who loll at ease or poor who beg, and we lack people of the middle sort, whom neither wealth nor poverty prevents from pursuing the rightful kind of business enjoined by natural law.

Before the fall, Spain had a thriving culture, and university system, ports fell into foreign ownership. Food it seemed was the only thing left to the Spanish. And whereas the pioneering spirit of Columbus was all entrepreneurship and risk – the financial system encouraged investment in government bonds not business. Invest in money rather than in the new – its safer. This reminds me of what is currently happening in the UK where Russian Oligarchs, Japanese companies and pension funds are buying land in Britain not to farm or better manage but to use it as a money making asset. Natures fertility no longer necessary. The Spanish economy collapsed in 1640.

Loss of a values based system: Boyle calls to the important qualities of a middle class of morals and ethics, of working hard towards a better life – but that is not all measured in Chelsea tractors and private schools and holidays in France. But time, quality of time to explore, investigate, learn, think and reflect and to just be. It is a value system. And without a true middle class – social and political unrest becomes inevitable. Perhaps why the Metropolitan Police wants water cannon on the streets of our cities. It knows what is coming.

The new elite, the Übermenschen, ushered in by the new policies of successive governments, have created an inflationary nightmare allowing a handful to join their ranks and steadily reducing the rest of us to the very dependence on tyrannical employers (‘Homely’ Boots treats its staff like red revolutionaries) and landlords that our ancestors began to escape two centuries ago.

This statement will resonate I believe with many people. How did we get there?

These combined have done great damage says Boyle, in a multiplicity of ways.

Everything is not lost: Boyle takes us to Dorset and to meet Tim Crabtree, who has responded imaginatively and entrepreneurially to the challenges we face today. He has done this via food for schools, and local investment vehicles designed to fund new businesses via local savings. It is a compelling story. That said local authorities linear procurement systems have not made it either easy or straightforward. But in spite of that Bridport thrives. It thrives because local people, have taken responsibility for their future by investing in their local economy – the future, and in fact the past as depended on well functioning local communities and economies.

Boyle has a 12 point plan for people to take accountability and responsibility to create a better future.

All very sensible and all very doable. Broke is a fine book, Boyle a fine writer. I would commend anyone thinking about why we are here and what to do about it to give it a read and then go do something to change the world we live in. We all have to Craft the future we deserve and not leave it to those that are only interested in the business of money.