Recently the Prime Minister’s Office let it be known that Prime Minister David Cameron sees Letchworth as a model community wanting to apply the principles of Garden Cities throughout the UK. 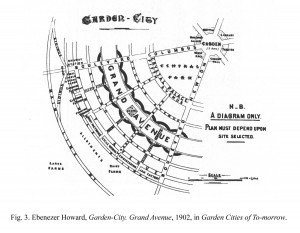 Map of the Garden City concept

I was born in Letchworth in 1964 and my parents moved there from London in 1958 and still live there. There is no doubt that Letchworth was inspirational in its conception and design. Ebenezer Howard the Quaker creator of Letchworth as a sustainable, green and greenbelted economically vibrant community gave a significant gift of what a sustainable community might look like in 1903. Its impact upon the world was to inspire the garden suburbs of Hampstead and Brentham, Welwyn Garden City and garden village suburbia in New Jersey and elsewhere in the US. There is much to admire.

The first Garden City Association conference was held in 1901. Cadbury was the host, George Bernard Shaw one of the distinguished speakers. In 1903, the association founded Letchworth Garden City, the very first of its kind. 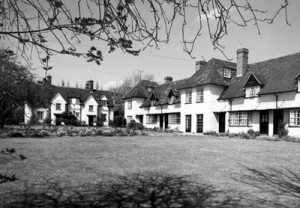 Returning to our current PM’s interest in Letchworth and garden city principles the question is to which time period is Cameron or his policy advisors pointing? Letchworth was pioneering in 1903, was still much in its prime in the early 1960’s but today Letchworth looks and is diminished.

The indoor market made up of small local traders, existing since I was a boy is closing as the rents are no longer affordable, Argos stands in its place. David’s the much loved Bookstore a stalwart of the town will eventually close, the Post Office a beautiful building has been shut, the local museum slated for closure. Two secondary schools have been shut down, so children have no choice but to travel further in cars to other schools outside of the town boundaries. Morrison’s dominates like a rather large unwelcome aunt in the town centre, and the only place you can get free parking in the town centre is in Morrison’s. Letchworth is a shadow of its former self-sustaining self.

Designing and creating a sustainable community in the 21st Century: Can David Cameron our PM learn from Letchworth? Yes is my answer Letchworth was pioneering but we need an upgrade to our thinking about sustainable towns and cities look like today? We must begin by understanding the interconnectedness of all the aspects that make a community properly thrive. It is all about designing with diversity in mind..

Lessons in resilience and sustainability: Ancient wisdom shows us that sustainable civilisations start with food. Food, locally grown, made, baked or brewed integrated into the local economy, creates jobs, it creates resilience economically, socially and organisationally. It creates a co-created cultural narrative, a critical element in healthy communities, and nourishes what is called knowable communities.

Sustainable communities can be nourished by community supported farms, bakeries and breweries of which there are many examples. Once upon a time Letchworth had the Letchworth Bacon Company, it had its own farms, reared its own animals, slaughtered them and made great products and delivered them locally, to butchers, pubs, mini-markets, and grocers. I know because my father worked there, I know because I used to go out on his rounds during the summer holidays. 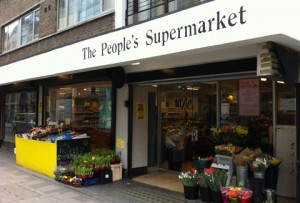 OK, so we also want more than artisan bread, The Peoples Supermarket is demonstrative of an alternative model of supermarkets designed for local communities. The Peoples Supermarket offers discounted lower cost produce, groceries etc., also connected to local food production if you volunteer a few hours every week to work in the store. From a simple economics perspective these approaches ensure money is circulated back into local economies, whereas Morrison’s or Argos take the money out. The mantra from Argos, NEXT, TESCO’s etc., that our main high street supermarkets/shops/retail stores create jobs though true, is, depressingly myopic because they often do more long term damage to the fabric of communities in a multiplicity of ways. Once the feeding is done, its time to close shop and move on. The legacy no commercial vibrancy, and, a queue at the local job centre.

Shareable civic space: So what can we learn from civic centres today that are exploring how we create a better place for us to live in.

The idea of shareable cities is being pioneered in San Francisco by Mayor Ed Lee, who set up The Sharing Economy Working Group its purpose to take a comprehensive look at the economic benefits, innovative companies and emerging policy issues around the growing ‘sharing economy’. This evolved into what is called the shareable city. Instead of pursuing strategies based on big taxpayer subsidies for big-capital projects managed by political and corporate elites, the San Francisco “shareable cities” vision aims at decentralised participation by ordinary citizens and neighbourhood groups in conjunction with nimble, socially attuned start-up businesses.

Such a practical approach could help many it doesn’t need to be the size of San Francisco to work. 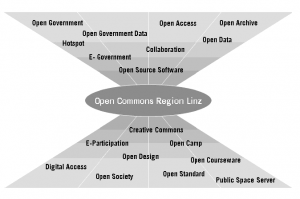 The city of Naples is now engaged with many flourishing bottom-up participatory initiatives, shaped by the concept of the open society. This is people power in action. And, the city of Linz, in Austria has been working on a concept called the “Open Commons Region”, the means to make civic space work well by providing resources that serve the common good which are freely available for example access to wifi connectivity, access to data and data related services.

Summary: We have the opportunity to transform our local communities, to deliver regenerative societies, we have the opportunity to be as inspirational and creative as the Cadbury’s, the Bernard-Shaw’s, and the Howard’s as they were in their day – but we have to do it for our time, and curate all the great examples which clearly show how we can create better towns and cities for our world – today.

In No Straight Lines the concepts of resilient and regenerative communities are explored.