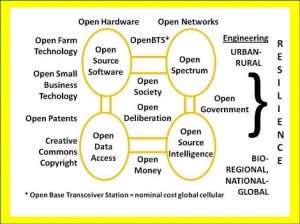 The renaissance of collaboration and the higher purpose organisation.

“Open Collaborative organisations remove the traditional constraints placed upon any organisation. It permits the asking of powerful framing questions. These framing questions enable us to see what others don’t. Open source regenerative business models and the decentralised organisation become mainstream. This allows the scale of the problems we face to be met by participatory and collaborative systems and cultures. These organisations work towards a higher order purpose. This higher order purpose delivers consistently higher performance with outcomes that are truly authentic, more resilient and relevant.”

I wrote this in Lisbon last week when working at the invitation of Pip Coburn of Coburn Ventures with a group of fascinating people on the theme of “Seeing What Others Don’t.” Openness and Participatory Cultures and Tools are principles 3 and 4 of the No Straight Lines innovation framework.

On the way home I read a fascinating article (The open source revolution is coming and it will conquer the 1% – ex CIA spy) written by Nafeez Ahmed about Robert David Steele and his thesis that Open and Collaborative systems are the only means by which we will meaningfully move forward. Ahmed writes,

Steele is hugely respected by senior military intelligence experts across the world. As a researcher at the US Army War College’s Strategic Studies Institute, he has authored several monographs advocating the need for open source methods to transform the craft of intelligence. He has lectured to the US State Department and Department of Homeland Security as well as National Security Councils in various countries, and his new book has received accolades from senior intelligence officials across multiple countries including France and Turkey.

Yet he remains an outspoken critic of US intelligence practices and what he sees as their integral role in aggravating rather than ameliorating the world’s greatest threats and challenges.

I never thought I would be reading about Open Source Intelligence. Steele’s book is called The Open-Source Everything Manifesto: Transparency, Truth, and Trust.

His belief is that openness and collective access to information results in a more democratic and accountable system of governance Steele argues that Open Source principles are as applicable at an institutional level as they are in Information Technology. In his words, everything is information, information is everything and if we open source everything, we are really opening up all information and all minds. Nobody, is as clever as everybody – is another way of describing the potential of harnessing our collective intelligence. In Ahmed’s interview he expands this thinking,

“Believe it or not, 95% of what we need for ethical evidence-based decision support cannot be obtained through the secret methods of standard intelligence practices. But it can be obtained quite openly and cheaply from academics, civil society, commerce, governments, law enforcement organisations, the media, all militaries, and non-governmental organisations. An Open Source Agency, as I’ve proposed it, would not just meet 95% of our intelligence requirements, it would do the same at all levels of government and carry over by enriching education, commerce, and research – it would create what I called in 1995 a ‘Smart Nation.’

“The whole point of Open Source Everything is to restore public agency. Open Source is the only form of information and information technology that is affordable to the majority, interoperable across all boundaries, and rapidly scalable from local to global without the curse of overhead that proprietary corporations impose.”

Nature thrives because she is open, and open systems evolve to states of higher organization, as Lee Smolin points out,

My point is these are the fundamental principles and insights that show us that openness, and open systems are very powerful. For Steele, the open source revolution is inevitable, simply because the demise of the system presided over by the 1% cannot be stopped – and because the alternatives to reclaiming the commons are too dismal to contemplate. We have no choice but to step up.