Joel Salatin on the potential of large scale organic farming 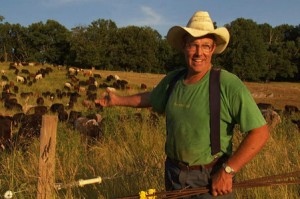 Joel Salatin is America’s most celebrated pioneer of chemical-free farming. Here Joel gives a powerful talk on why our current industrial way of farming is so wrong in so many ways. Demonstrating the potential of how we can do it differently – better and more in step with the way of the natural world. Salatin says we can feed the world but not by industrial methods. Salatin argues that the industrial farming of animals is nothing short of horrific – never being concerned, as he calls it with, “the pigness of a pig” – and that we have become so urbanised many people have lost all sight and context of how food is produced. And, that he says, really gives you a very jaundiced view of cycles of life – death, and regeneration.

Salatin makes a point I love in his talk – “we dont ship.” Thirty miles is the distance they will transport their produce. The point being, that, food transported long distances, takes up energy, makes carbon and uses more calories than it gives back. Cheap food – is in fact very expensive in ££ terms plus the cost to our health.

Without food systems that are local – sustainable, regenerative, life affirming, kind to animals and the soil – we are left with little in so many ways. I live in highly industrial farmed arable land. The chemicals that run off into the dykes, drains and rivers worries me. Getting a nauseous headache after walking 500 meters near to where a farmer had been spraying his crop – to ensure he maximised his yield was not a pleasant experience. The argument is, this is the ONLY way to farm so we can feed everyone cheaply. So we have to bear the high costs  of those those inputs to the economy of farming. This to me seems a strange set of economics.

Organically farming at scale significantly reduces input costs (as you are already working with the resources of nature), reduces yield but – increases overall profitability. Surely that makes sense? Well only if you are a nonlinear thinker / doer. This linear quest for efficiency in everything we do becomes a form of fundamentalism – market fundamentalism, the fundamentalism of linear scale whereby we struggle to see that the people we are going to hurt the most is ourselves. Because those chemicals used to in the production of all that we eat – simply does not disappear.