Kano: helping make creators of the future not consumers of the past 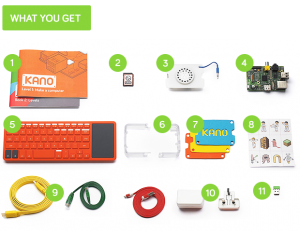 Kano: learning to code our future

I thought of Lewis Hyde who wrote in The Gift, “we’ve witnessed the steady conversion into private property of the art and ideas that earlier generations thought belonged to their cultural commons”, when reading Miranda Swayers piece on the computing company for kids – Kano. Essentially Kano is plug and play coding making computing and the creation of things via coding and computing accessible to all comers. Hydes observation also resonated, when Alex Klein one of the Kano founders tells a story from an experience from Zuccotti Park when as a journalist he was covering the Occupy Movement, he asked the Occupy-ers why, if they hated big business so much, they all used iPhones and Samsungs.

“I said, because I’m a bit of a nerd, ‘Why don’t you join the open source movement? Free software, protocols that allow for minimising government or institutional surveillance and maximising individual control over technology.’ I gave them the whole spiel. And they said, ‘Yeah, that’s fine – but these things aren’t designed for us, they are designed by the Silicon Valley elite. The open source community are geeks and nerds and they created the current inequality in technology.’ And when they hit me with that, I was like, ‘OK, you’re right.’ “

For me this is important as I believe that we are all inherently creative, and it is our collective creative endeavours that bring the new, the novel fresh-faced into the world. And for that we need creators of the future not consumers of the past. Huizinga observes that when ‘utility rules, adults lose something essential in the capacity to think; they lose the free curiosity that occurs in the open, felt fingering space of play, and Kano also reminds me that the capacity to work well is shared fairly equally among human beings; it appears first in play, and is elaborated in the capacities to localise, question and open up problems at work. We easily dismiss play or playfulness, which is essentially how we learn. Play is by default the process of experimentation, failing and learning – how we assert the future.

Klein talks about the democratising nature of coding and technology,

For me, the notion with Kano, on a micro level, was, ‘Let’s make a really fun computer kit for all ages.’ And then, on a macro level, it was to link niche technology to people to help break down the social frameworks we’ve created in the past three decades. Gross social inequality, a management class that is more centralised than it’s ever been since the Great Depression. And an economy that has tons of top-heavy growth, but none of the broadly distributed growth that was characteristic of, say, the 50s and 60s. That’s the macro story.

As they say – if you want to create the future, you have to hack it.