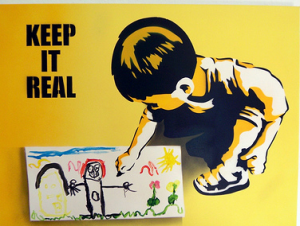 In No Straight Lines, I talk about the Human-OS, the human operating system and argue that these are the fundamentals of what we need to think about when we design for the needs of humanity. The last point is beauty.

When one talks about beauty initially there are a few raised eyebrows, as we have been taught that to engage with the idea of aesthetics, of beautiful things is somehow a weakness. That beauty is not part of the world of grown ups. It is for children not business, beauty must be kept in its rightful place.

Yet beauty is about beautifully conceived and written code, a beautifully conceived and built building that embraces our humanity (read Urban forests in the skies of Milan below) rather than the 1950’s tower blocks that destroyed the social fabric of communities, beautifully conceived organisational models that work with the grain of humanity – our social context and our ability to work collaboratively together, rather than against it. It is also understanding that beauty can be complex and by working with complexity rather than breaking it down into industrial units or as KPMG claims we should cut through complexity, we can deliver higher higher performing organisations of far superior quality. Examples below. Beauty can also be a design philosophy – the touch screen phone is a beautiful thing. Apple makes beautiful products, and they are beautiful because they work so well.

In its true context aesthetics guides us towards aspiring to create something unique and of true value, and I often make the observation that when people have ugly thoughts the only thing that manifests itself are ugly things (and we have seen far too much of that lately) that do not serve us as a society or as a humanity.

So the next time your children show you a drawing and you say ‘isn’t that beautiful’, reflect for a moment as to whether that could be a conversation being had in which a bunch of grown ups are reflecting on whether they have conceived and created a thing of beauty too?