People embrace what they create in Istanbul 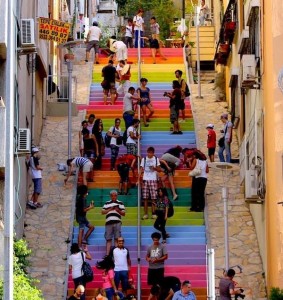 People embrace what they create

It was Jamie Lerner the Mayor of Curitiba who when he took office and facing many challenges decided to galvanise his citizens into life to make Curitiba work. Lerner said the work they undertook should be fun, fast and above all non-expensive. The idea that we own, or have ownership over our civic spaces is very important. Home, hearth, kith and kin are all about belonging and identity.

So this is a small story about those things.  In Istanbul Huseyin Cetinel decided that the grey steps in his part of the city needed cheering up, so he painted the steps the colours of the rainbow. But the city authorities outraged at such outrageous behaviour sent teams of people after dark to repaint the steps battle ship grey. But then a quiet revolution started. Not only did volunteers come out to repaint those stairs that Huseyin Cetinel had spent hundreds of dollars on, they painted other stairs and walkways in cities around Turkey, posting photos on social media.

Maybe the city authorities should reflect on who a city is for, who uses it, and perhaps who owns it? People embrace what they create, and I thought cities were all about people and their lives?

Here is a film telling a peoples story.