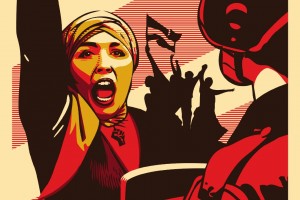 Insightful article by Zeynep Tufekci here research revolves around the interaction between technology and social, cultural and political dynamics, and she is particularly interested in collective action and social movements, complex systems, surveillance, privacy, and sociality

Why is it she asks that when power does such terrible things to a people, a country directed from above that the collective find it so hard to challenge this authoritarian power.

It is a story that is explored in No Straight Lines.

“Collective action problems” arise when a problem can be solved only through cooperation by many, but when there are strong disincentives for any one individual to participate, especially if victory is not guaranteed. These problems can be seen as a society-level version of the “prisoner’s dilemma,” a well-studied model in game theory where two criminals in custody are told they will be allowed to go free if they confess and their partner doesn’t or if neither confesses; however, they will be punished severely if their partner confesses and they don’t. The logical option would be for both to “defect” and confess for fear the other one would; this seemingly logical outcome is actually to the detriment of both, who would have been better off if neither confessed.

Collective action problems are hardest to crack if it’s difficult for citizens to coordinate and communicate. Indeed, game-theorists have long known that communication between participants dramatically alters the dynamics of these “dilemmas” which appear rigged against the interests of the individuals 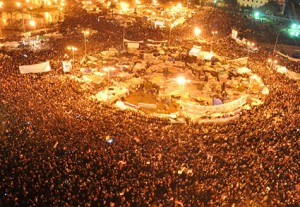 the power of collective action

Which is why new communication technologies always precede a social revolution as they are not so controlled by authority – look at our government having the wobbles over Blackberry and BBM after the London riots. The new media ecology she says is not just the Internet but a potent combination of a politicized pan-Arab broadcast network, Al-Jazeera, mass diffusion of video and picture-capable cell phones, as well as social media—and all this in just a few years. Facebook in Arabic was introduced in March of 2009 and taken up quickly with about five million users in Egypt by the time the protests rolled around.  There were only 28,000 Facebook users in Tunisia at the time of the Gafsa protests but there were more than a million when Bouazzizi committed his desperate act of self-immolation. It is a fair question to ask that as young people today grow up in a world saturated with digital media, how does it affect their sense of self and others? As they define and redefine their identities through engagements with technology, what are the implications for their experiences as learners, citizens, consumers, and family and community members?

She concludes: The very survival of our species may depend on finding a way to organize our way out of situations in which there is a strong conflict between individual incentives and collective goods within our hierarchically organized societies. I would agree, when institutions fail people learn to get what they need from each other, and as we enter a more dramatic period of epochal change it will be our collective capacity to confront these challenges that decide what next looks like.