Rupert Sheldrake and the dogmas of scientific materialism 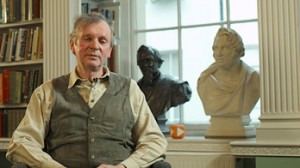 TED banned this talk, I wonder what was so controversial? Of particular interest to me the idea of variations in the speed of light and the variations is gravity, aka, ‘the big G’. Sheldrake goes onto talk about the big idea that the laws of nature at an atomic level are never set, are not constant as Newton proposed but are in a permanent state of evolution.

This is something that Lee Smolin explores in his book 00:00 Time Reborn.

The progress of science has been marked by the dismissal of illusions. Matter appears to be smooth but turns out to be made of atoms. Atoms seem indivisible but turn out to be built of protons, neutrons and electrons, the first two of which are made of still more elementary particles called quarks… and when you get down to it, it turns out that everything moves relative to everything else.

You can trace the properties of the present universe back to properties it must have had at its beginning. But you cannot show that these are the only properties that any universe might have had… Earlier or later universes might have had different laws… To state the laws of nature is not to describe or to explain all possible histories of all possible universes. Only a relative distinction exists between lawlike explanation and the narration of a one-time historical sequence.

And it was John Archibold Wheeler who also believed that the laws of nature were not static / constant but, evolved – they were emergent. Gottfried Wilhelm Leibniz, believed that time must be a consequence of change and Einstein used that theory to overthrow the Newtons concept of everything constant and in its rightful place that were eternal / unchangeable laws of the universe. As science progresses, aspects of nature once considered fundamental are revealed as emergent and approximate. Solids, liquids and gas are just alternative ways to remix atoms that make everything. So why can we not question dogma, the fixed and the irrefutable?

For me my journey into this work is to explore the idea that nothing is fixed, complexity surrounds us, we must always evolve, which means, being part of this extraordinary universe, we must too. Our economies, our organisations, the way we see the world and what we build organisationally. Galileo was extraordinary because of the nature of the questions he asked – should we not be intrigued by Ruperts questions?

His summary is wisdom – dogmas create creative myopia. Not being prepared to challenge existing theories means we become stuck in a world that is in permanent evolution.