Shan Williams what do you do when your town is dying? 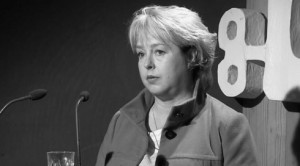 What you do when your town is dying

“Cardigan has suffered too much with big companies trampling over our resources” so says Cardigan Bay Councillor Shan Williams. 3000 people sign a petition to say they did not want another supermarket  Supermarkets  already extract every week some £4m from the local economy. The imperative is to get money back into local economies. “We do not need to be so poor” says Shan and points out that Cardigan used to produce, and consume the majority of food that it needed. In the same way that my agricultural village of Over used to do – and create a surplus and sell that surplus on. £11k every week leaves Cardigan for the water they use. And if you know Cardigan – its awash with the stuff (pardon the pun). Shan asks, “have we forgotten how to feed ourselves, produce our own electricity?” – Cardigan or nearby had the first hydro-power plant in Wales. Shan makes the point that all this money needs to stop leaving Cardigan and start to circulate in the local economy. B&Q comes to town and a local hardware store is up for sale. Point made.

Of the course the question next up is this, if £4.2m could be reinvested into Cardigan as a local economy how many jobs would that support? Because that money does not re-flow back into the community, as a consequence young children educated locally, are then forced to leave the place they love and identify with, their community, just so they can become earn a living. Leaving of ones own free will is different to forced migration. Maybe we should reflect on that fact when we consider immigration? The point is made that as each person leaves a little piece of culture dies. Shan explores reconnecting people to the natural resources that made it a viable and sustainable community in the first place and I believe that by integrating that with some forward thinking we can start to re-imagine and re-create our local towns and communities.

In the introduction to Shans talk – The Do Lectures write, Up and down the country, our towns are dying. When convenience became the precedent over local, we opened the doors for the conglomerates and they made themselves at home. Our highstreets now consist of the big names, charity shops and abandoned units that reek of recession. You can practically see tumble weeds. In one of the most humbling and emotionally driven DO Lectures, Shan Williams spoke of her organisation 4CG, a group of people that are solely dedicated to the regeneration of their town, and how it all started in a council meeting when a prime site came up for sale in her beloved town of Cardigan. Have some tissues near to hand. A tale of trial and tribulation driven by passion and a fierce local pride, Sian concludes her talk by detailing the most recent success of 4CG and, most importantly, what needs to be done to secure a more stable and profitable future for her town.