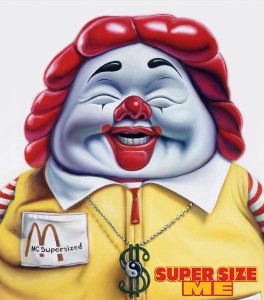 As you read this, take a look around and at yourself. You are decked in and surrounded by symbols of consumer society. It’s not just your clothes that give it away, but your watch, jewellery, mobile, MP3 player, bag; the furniture and the fittings; all are brands designed to speak for you. Wasn’t it ever thus?

It is not just the environment that is in peril, or even our own happiness as we exhaust ourselves working harder for our Prada. Remember, the point is to leave us unfulfilled so that we quickly go back for more. The most dangerous consequence is the eradication of alternative ways of being. Today, the dream of the good life is found by flicking through the weekend colour supplements; in new kitchens and cars as we feel compelled to keep up on the consumer treadmill for fear of being defined as abnormal; as failed consumers. We vote every day with our feet for our own good life. It cannot be the good society because there is only consumer society.

The market extends into more aspects of our lives in its search for profit. At the weekends there is increasingly nowhere to take the family but the shops and other paid-for experiences. We end up in a vicious negative feedback loop; we shop literally for retail therapy, to make us fleetingly feel better because we live such narrow monocultured lives. But the very act of finding compensation for a truly free life through consumption further closes down the space for real alternatives. And so it goes on.

And I tend to agree. In No Straight Lines, this phenomena is identified as part of our trilemma, but more importantly we look hard at HOW it can be different

The wholesale pursuit of material wealth has in fact come at a terrible cost for society, the recent banking/financial crisis a poster child for the decades of institutionalized abuse that has deeply damaged us, spiritually and ironically for many, materially. We have refocused our lives not on the common good of man but for the common good only of ourselves. You could argue that via the industrial mass consumer logic, we have taken ourselves out of the very thing that makes us who we are – nature. This is a whole-scale tragedy for human nature both collectively and individually, what many described as the tragedy of competition. We have forgotten about the morality of enough.

Lawson challenges the fact that all the mainstream parties are complicit in continuing the fabrication of consumer life and culture.

Who will challenge this creeping monoculture? Not the main political parties. They offer only minute variations of the same pro-consumption product; for Labour, the Tories and the Lib Dems read Tesco, Sainsbury and Asda. They even behave like retailers, testing policies to see what works best and adjusting them accordingly as they compete for market share. Meanwhile, retailers appropriate what’s left of the language and culture of democracy. Walkers crisps holds the biggest election of the year for its new flavours; Costa Coffee claims “the people have voted” and that seven out of 10 prefer its brand over Starbucks.

It’s what Robert Reich calls Supercapitalism, and what Thomas Frankin his book One Market under God called Extreme Capitalism: the obsessive, uncritical penetration of the concept of the market into every aspect of  life, and the attempt to drive out every other institution, including law, art, culture, public education, Social Security, unions, community. It is the conflation of markets with populism, with democracy, with diversity, with liberty, and with choice – and so the denial of any form of choice that imposes limits on the market.

More than that, it is the elimination of these separate concepts from our political discourse, so that we find ourselves looking to the stock market to fund retirement, college education, health care, and having forgotten that in other wealthy and developed societies these are rights, not the contingent outcomes of speculative games. JG. Ballard wrote

to be a consumer is to be a citizen; where ownership of a loyalty card represents membership of humanity itself; and where spiritual experience takes the form of retail epiphany.” As one typically lucid, socially-fascinated character observes of his fellow-citizens: “We’re all children today. Like it or not, only consumerism can hold a modern society together… Societies are happier when people spend, not save.

So its “shopping or freedom” as Benjamin Barber observed,

An ironic and poignant statement if I ever heard one.

And the media perpetuates, the crack cocaine of consumerism. The symptoms of the crisis of the media are well-known: a decline in hard news, the growth of info-tainment and advertorials, staff cuts and concentration of ownership, increasing conformity of viewpoint and suppression of genuine debate. The problems are due to the effective concentrated corporate control over the media system with its obsession with maximizing profits regardless of the consequences.

However, I do think there is a movement away from seeing life through the translucent lens of a shopping bag. A new generation of people – as much as they can – are living off the land: swapping their inner city gardens for handscrabble small holdings, the daily commute for early morning goat milking, their domestic cats for pedigree pigs, their blackberries for home-made compost. A shift in ambition away from consumerism and city life, even as the credit crunch takes hold, for the first time in generations more people more people are moving to rural areas that are moving out of them.

Exhausted by consumerism and a post-industrial life people are beginning to ask what more exactly means, realising that it does not exist at the bottom of a shopping bag.

David Boyle in Authenticity, Brands, Fakes, Spin and the Lust For Real Life argues that we are witness to the emergence of a powerful new trend – pro-local, pro-authentic – that will overturn our conventional assumptions about globalisation and virtualisation. Authenticity tracks the emergence of the New Realists – possibly up to 50 per cent of the population of the UK – who are not convinced by corporate technologists and globalizers, and are increasingly committed to real food, real culture, real politics, real schools, real community, real medicine, real culture, real stories…

We have come through a period of unprecedented prosperity and aggressive certainty, ushered in by the end of the Cold War and the internet revolution. We have been told endlessly that the future is going to be overwhelmingly global and gloriously virtual, and that the two strands are intricately related. We have seen the pictures of rabbis in black robes with ringlets, putting their mobile phones up to Jerusalem’s Wailing Wall so that relatives in New York could pray. We have read about the call centre staff in India who are given detailed lessons in the niceties of Eastenders, so they can exchange chit-chat with callers ringing about gas leaks in Weybridge.

We’ve probably talked to them ourselves without knowing it. The recession may have slowed down the ‘inevitable’ progress towards a virtual world, but we most of us accept that globalisation is with us for good.Yet that ubiquitous trend has begun to spawn its opposite, and – although the demand for the real is barely showing itself above the horizon yet – it has already begun to make itself felt in many different areas of cultural life, from poetry to politics and from food to fashion. It is beginning to be clear that the dominant cultural force of the century ahead won’t just be global and virtual, it will actually be a powerful interweaving of both opposite drives – globalisation and localisation, virtual and real, with an advance guard constantly undermining what is packaged and drawing the rest of society along behind them.

I think we can shop, I think its OK to do that, but we as a population have been weaned off the idea of accountability, responsibility, public engagement, and political participation. That said I do think that the rise of the networked society, that is engaged and connected demonstrates that over the next 20 years we will see a real evolution of our current society, which will also change our values, and our sense of ourselves in the world.

No Straight Lines examines WHAT that looks like and HOW we achieve it.