The human need to transcend 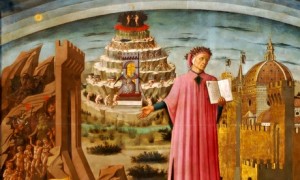 A detail from Dante and the Divine Comedy, by Domenico di Michelino.

Kenan Malik writing in his excellent article about the sacred in art, explores the capacity of the sacred to go beyond religion to become a necessary part of what makes us human. He writes,

Not so much as an expression of the divine but, paradoxically perhaps, more an exploration of what it means to be human; what it is to be human not in the here and now, not in our immediacy, nor merely in our physicality, but in a more transcendental sense. It is a sense that is often difficult to capture in a purely propositional form, but one that we seek to grasp through art or music or poetry. Transcendence does not, however, necessarily have to be understood in a religious fashion, solely in relation to some concept of the divine. It is rather a recognition that our humanness is invested not simply in our existence as individuals or as physical beings but also in our collective existence as social beings and in our ability, as social beings, to rise above our individual physical selves and to see ourselves as part of a larger project, to project onto the world, and onto human life, a meaning or purpose that exists only because we as human beings create it.

For me when exploring the human side of innovation, either in the deep process capacities in things like participatory leadership, which can deal with large scale systemic change inside organisations because it is conducted at the human level. Or, at a more general level of embracing and understanding our humaness is essential to creating better organisations, and societies.  Transcendence is the capacity where “I” becomes “We”, and we can only do that when there is powerful trust present. And of course there is great cynicism and distrust of human centered design – flat and networked – as opposed to hierarchical.

Perhaps this is is because as Malik describes,

At the same time, there began to develop, too, a much darker view of what it meant to be human, as the optimism about human capacities that had originally suffused the humanist impulse began to ebb away. The late 19th century experienced not simply a crisis of faith – what Nietzsche called “the death of God” – but also what has been called “the crisis of reason”, the beginnings of a set of trends that were to become highly significant in the 20th century: the erosion of Enlightenment optimism, a disenchantment with ideas of progress, a disbelief in concepts of truth. The history of the 20th century – of two world wars, the Depression and Holocaust, Auschwitz and the gulags, climate change and ethnic cleansing – helped further shatter the old sense of hope and optimism about human capacities.

This is a fascinating observation when one considers how much faith we put into numbers for measuring things – even people. Today, science, and the tyranny of numbers rule our world. They have a place, but so does the capacity for transcendence. Why? Because,

The humanist impulse not only liberated the sense of transcendence from the shackles of the sacred; it also transformed the idea of transcendence. The transcendent was no longer linked to the divine; nor did humans fulfil themselves solely through union with God. Rather humans came to be acknowledged as conscious agents who could transform themselves and the world they inhabited.

One Response to The human need to transcend