The No Straight Lines challenge: be realistic imagine the impossible

Summary introduction to No Straight Lines: making sense of our non-linear world

No Straight Lines argues that humanity shifts gear when it demands fundamental change to its real world circumstances and this moment in time really does feel like a turning point in our collective approach to the organisation of the economy and society as a whole. So what does humanity want, and, how is this aspiration driving systemic change? How do we design better for society, our organisations, and be commercially vibrant all at the same time? Because what we face right now is a design problem. The reason is that we are witness to a systemic failure of many of the institutions that have brought us so much prosperity and it is this convergence of failures that requires us to understand the challenge from a different perspective.

Be realistic, imagine the impossible – then create it: what do these have in common? A car company built around a global community as an organisation, enabled by combining flex manufacturing techniques, open source platforms, open legal frameworks and social communication technologies premised upon cooperation, fuelled by the desire to be a great company and green; that can build cars 5 times faster at 100 times less the capital costs. A crisis management platform and organisation born out of the Kenyan post-election crisis of 2008 that can record critical information of events unfolding on the ground via a blend of location-based data, eyewitness accounts and mobile telephony, from often hard to reach places which visualises those unfolding events so that others can act and direct action at internet speeds. And now utilised for free in many parts of the world. Or, the largest organic diary farm in Britain, that has evolved a methodology that allows it to remain autonomous, profitable and sustainable in a market that is acutely volatile, because large-scale agricultural farming is mostly run on an oil-based economy, plus diary farmers are at the calculating mercy of the marketing needs and whimsies of large chain supermarkets. 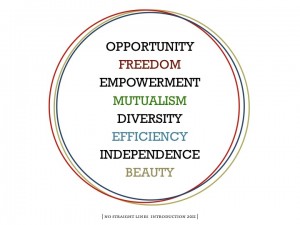 Upgrading to a new potential: They are collectively representative of a new reality of living, working and organising. These organisations or companies have quested to find a means to serve humanity better, to search for meaning in the work that they and others do, and offer up new viable alternatives for the ways that, in the past, these things were done. They seek an outcome that is more distributive of wealth, ideas and resources. In fact, one might argue an outcome that is more humane and community centric. Rather than premised upon the extraction of wealth, and resources, whether they be physical, mineral or otherwise, these very different initiatives represent both moral courage and a collective purpose, if you will. And why is that important? Because it does not matter if you are an employer, a worker, VC fund, an NGO, an organisation, a local council or a government, you will miss out on the energies and capabilities of your people who will increasingly seek those new realities to discover a better way of living, working and being, when better and viable alternatives are on offer. And the fact is we now have the possibility to truly transform our world, to be more lightweight, sustainable and humane, through the tools, capabilities, language and processes at our fingertips. As Tony Judt argued: ‘Why do we experience such difficulty even imaging a different sort of society? Why is it beyond us to conceive a different set of arrangements to our common advantage?’

The opportunity and the design challenge: which brings me on to the title and the challenge of this project. Be realistic, imagine the impossible is taken from a poster from the 1968 Paris riots. In making sense of its meaning for our time, I would argue that what we face at the tail end of our industrial society is a design problem. The reason is that we are witness to a systemic failure of many of the institutions that have brought us so much prosperity and it is this convergence of failures that requires us to understand the challenge from a more holistic perspective. 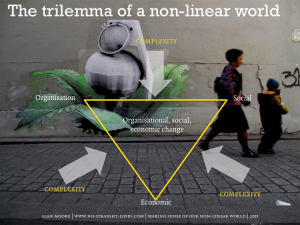 What were once seen as big problems but ones that would not affect us – have rudely arrived together. The ongoing crisis in our financial systems which has now impacted sovereign states and their social fabric, our businesses, and our economies, the abuse of corporate power, for example, tax evasion and the phone hacking scandal (representing a moral Rubicon we have crossed), the integrity of our food systems, the crisis of healthcare, the rise of food banks, combined with increasing social problems of poverty and identity. The point being, these are all inter-connected with each other.

The design challenge involved in resolving these questions comes because the non-linearity is causing a comprehensive restructuring of society at large, breaking old models of organisation, and the trilemma heralds the coming of the age of uncertainty. All three tensions are in flux, and cannot be addressed without considering the other two. So each and every part of this story reflects upon and relates to this trilemma: the relationship of the individual to companies and other organisations and forms of power, economically, socially, politically. 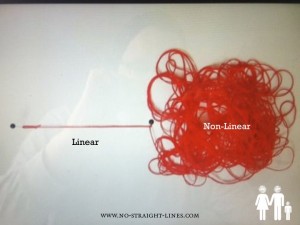 Learning to thrive in a complex world: Now is the time when we need a way of evaluating of what comes next, when we face a world that has gone in a very short period of time from seemingly linear (simple) to complex and non-linear (chaotic). When we move into a world that is inherently more complex, the result is concussive, its disorientating effects surround us, and our responses either individually or at an organisational level result in reflexes and perspectives that can be dangerously corrosive or inappropriate. And yet, this chaos seems to be, if anything, accelerating. At this very moment, great debates are raging. The spanners are in the works, defined by 9/11 (we now talk about asymmetrical warfare) and the near collapse of the world banking system (and its asymmetrical impact on every single one of us). And, as the global centre of economic gravity moves east, this has set off a series of events that are having significant asymmetric economic effects on societies around the world. These are but three examples of fault lines creating battles, ideological or otherwise, that are exploding and imploding at the same time.

They all surfaced in a single decade. Though it is important to add that their gestation period has been much longer and is indeed multidimensional. These challenges are highly interlinked and interdependent, so a one-size-fits-all response just won’t do. There are no longer simple problems; what we face is the trilemma of a complex world. This book does its best to face them, because we are in more than just an economic crisis; it is equally political, educational, spiritual and moral.

The cultural challenge: The biggest challenge we face is cultural. How we contextualise (make sense of) the world around us determines how we engage and what action we take. Those actions then determine the outcomes we must live with and this requires a change from our industrial mindset and behaviour to one that is more cognisant of what is now seen as a non-linear world. This is where I want to return to the idea that what we face is a design problem, where answers exist not at an unattainable theoretical level but on the floors of our factories, in the streets of our towns and cities, the classes of our schools, the waiting rooms of our hospitals. These answers will manifest themselves as true acts of creation, originating new ways of getting stuff done, informed by the decisions we collectively take. So in re-designing the world, we need human creativity in the sense of the capacity to ‘make’, we need visionary leadership in the sense of making a difference. And we seek the craftsman’s critical eye, steady hand and creative mind. It is this process of seeing – realising new pathways to success, by bringing two ‘unlikes’ (new information, tools, processes etc.) together in close adjacency – that we create, and make new things. Then we can meaningfully apply that capability. 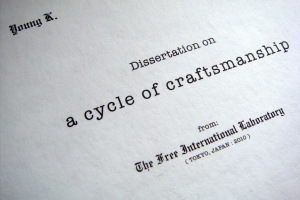 The coming age of the Craftsman: why is the idea of craftsmanship significant at this epochal moment in time? Because it is about shaping our future and the ‘engaged’ craftsman brings the full power of humanity to bear upon his work. His hand is guided by his eye, informed by his creative mind; his productivity the act of unique creation. Indeed, the master craftsman is adept in using a philosophical framework, as well as tools and materials, to deliver useful things to the world. But more than that, the craftsman must be open constantly to new ideas; he is essentially always in beta. Therefore, we cannot engage with our uncertain non-linear world with the linear and inflexible orthodoxy of logic alone. The craftsman’s critical eye and creative mind is vital to evaluating new possibilities; he must be open to new ideas, information, tools and materials to make things that enable humanity to flourish. This approach is inherently more creative in that it synthesises all aspects of what make us truly human. But the 21st century craftsman does not only exist in the dusty workshop of a forgotten age; a games designer is a craftsman, a Linux programmer is a craftsman, innovative organisations like Local Motors and Ushahidi, which are discussed in more detail in Chapters 3 and 8, embed craftsmanship into everything they do. These are well designed responses to what real life previously perceived as intractable as the plot line in Catch¯22. 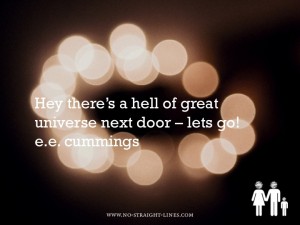 Every single one of us: I hold a strongly held belief, that there is an opportunity to bring a way of thinking to many of the seemingly intractable problems that confront us today. But this requires us to think and act as craftsmen and women and apply our critical thinking to understanding our non-linear world, which is in part shaped by participatory cultures, open, complex and seemingly ambiguous systems that are highly interdependent of each other. We need to be inspired to be epic, to seek epic wins – to design for transformation, to make informed choices and co-author innovative new possibilities that can enable humanity to lead a life not constrained by the crushing reality of industrial-age thinking but one designed around the primary needs of humanity. We need to explore our non-linear world, not exploit it.

I believe there is much evidence demonstrating the possibility of this society. It exists in philosophical frameworks, language and literacy, legal frameworks, tools and technologies, and real stories of how others have been motivated by a real desire to create new and better answers to what others would call unsolvable problems. And it has been my mission to bring together these separate component parts to offer to you a vision of the world which is both realistic and eminently possible. But to create this regenerative society requires us to take a voyage of discovery and to look upon the world as Proust would say with fresh eyes. This is the world of no straight lines and this project is how we make sense of this non-linear world, and then act in it.