True craftsmanship is total commitment to the moment of creation

Principle 5 of No Straight Lines is Craftsmanship. Here artist Miyoko Shida demonstrates the idea of what it means to be fully engaged in an act of creation.

Here an excerpt from an interview with Henry Jenkins that explores the ideas of the meaning of Craftsmanship. 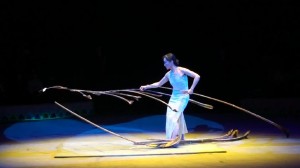 Insights to Craftsmanship: Richard Sennett in The Craftsman reminds us of a number of things to reflect upon. First the craftsman represents the special human condition of being ‘engaged’.

Secondly, Hephaestus was the Greek god presiding over the craftsman, the bringer of peace and the maker of civilization. ‘More than a technician, the civilizing craftsman has used his tools for a collective good’, he writes. And it was through the spirit of the Enlightenment that the craftsman brought forward a huge surge of social and creative innovation that made the lot of ordinary humans better. So the craftsman questions why he makes things; he must evaluate the energy, effort and time that will consume him in his craft and the final act of creation – is he doing good, is he solving a real problem and offering up something better, is he using all his skills as a civilizing force? These questions must weigh constantly in his mind.

The craftsman is always in beta: His mind must be open to new ideas, techniques, tools and processes; to close his mind to the new, or new ways of doing things, is the greatest risk he will take. The ability to bring two unlikes together in close adjacency and recognise a pattern or a new possibility is the true act of creation; Lennon and McCartney or the fusion of medical knowledge and computing are but two real life examples of what I mean. The craftsman must combine technique and expression so that he is also able to act intuitively.

This can only happen when he possesses deep or what is called implicit knowledge. Rather than acting only upon empirical information, the craftsman’s ultimate act is one of unique expression which can only be delivered through the mastery of these skills.

Does this description describe work for the majority in the early 21st Century? I was asked by a senior leader of a large organization, when I was running a Transformation LAB, whether craftsmanship as a culture could truly be inculcated into a large organization – my answer was yes but it does require a change of culture. The ability to create a dynamic where space is created for a constant process of creating, critiquing, collaborating and communicating.

We are all designed to be risk averse, yet there are ways to mitigate risk, and that is through pattern recognition. Where people see no connection, no pattern, no new pathways, only chaos, the craftsman see patterns, which he can then deconstruct into steps that will lead him successfully to achieving his goal. ‘What do you see?’ and ‘What do I see?’ are questions we need to ask as we seek. For example, if I use Creative Commons legal frameworks in the design and manufacture of cars, what might that mean to accelerate innovation? If I use a highly motivated community open source software connected up to Google APIs and mobile GPS technology, what might that mean? If I use revenue sharing, how will that make my business more attractive yet more disruptive at the same time? Pattern recognition comes from insight – it doesn’t come from an inflexible linear process.

This is also a form of systems thinking – the craftsman thinks about the whole system.

The craftsman also knows how to deliver quality without it necessarily costing the earth.

This then leads on to the idea of whether creativity is a resource or a competence. Organizations from a linear world are designed to function at 100% efficiency, which largely means there is no way in which they can also be creative organizations, as this requires room for reflection, deliberation, conversation, trying stuff out; that’s the practical stuff, but also industrial organisations ideologically fear creativity – anything deemed ‘creative’ is outsourced – but for the craftsman, and the crafted organization, creativity, to be creative, to think and act creatively is something that is a fundamental part of what makes them who they are.