True knowledge exists in a network 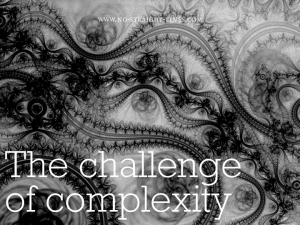 Lee Smolin describes our universe at an atomic level as curved, open, diverse and highly networked, Manuel Castells describes our society as evolving into a networked one which as significant cultural and political implications, Janine Benyus talks about nature as a highly networked open, diverse eco-system from which we as humans have much to learn revolutionising how we invent, compute, heal ourselves, harness energy, repair the environment, and feed the world.

All three talk about a nonlinear world, a complex world, a world through which energy and information flows – our world has always been networked its not new – linear was novel, industrial scale was novel – we just did not know how to design and harness networks and the power and potential of complexity.

Dave Weinberger chatting recently about knowledge is an interesting contribution,

There’s a sense in which we’re comfortable saying that knowledge lives in books and in libraries. Of course in human brains as well, and that’s always the case, but that’s where we’ve externalized knowledge. And so it’s reasonable to look… That’s why we revere books and libraries. I say this, by the way, as somebody who quite literally works in a library, and that’s in fact where we are now. So we’re comfortable with that idea. And if so, then I think that it’s time to take that idea and apply it instead to the new medium and say in the same way, knowledge lives in the network. Of course it requires human beings. I have zero interest in the concept of networks becoming intelligent and superbrains, I think that is a dream of people who see information everywhere and forget things like flesh. That’s not what I’m saying. But in the same sense that knowledge is in book and libraries, knowledge is in networks. But because it’s a network, it has a different shape, it has different properties, it has different dynamics, it has different power dynamics and different economics. It’s different.

So, if say, an organization is not geared up to operate in this way it is essentially not a living system, it is a dying system. Because knowledge and the life giving energy of that knowledge is not being distributed as it should. Weinberger is talking about new organizational models, a different philosophy and ways of organizing. We could apply that to commercial as well as non-commercial organizations, that have become so hierarchical and siloed that remove the capacity for knowledge to flow as in a natural system.

Life in organisations is unavoidably messier and more uncertain than the formal strategies, structures, systems and processes imply. And yet most discussions of organisational management and leadership practice remain firmly rooted in mainstream presumptions of certainty, predictability and control.