Welcome to machine - human nature is not like a machine 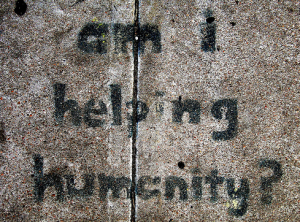 A question we now urgently need to be asking

John Stuart Mill writing in On Liberty in 1859 said “man (humanity) is not built like a machine, that should be set to do the work exactly proscribed to him but should be seen more like a tree, that can grow on all sides depending on the inward forces that make it a living thing”.

That quote has always resonated with me. As it leads to the question, what makes work worthwhile? And how do we define work? This thought cropped this morning reading an article that Per Håkansson had flipped over to me. It was Douglas Rushkoff musing on the mantra of jobs, jobs, jobs Are Jobs Obsolete? – yes he agrees we all want to be doing useful things – but the jobs our current politicians describe he feels are built on a dying age, an industrial age. Perhaps he suggests we could envision a far better way of filling our time…

This sort of work isn’t so much employment as it is creative activity. Unlike Industrial Age employment, digital production can be done from the home, independently, and even in a peer-to-peer fashion without going through big corporations. We can make games for each other, write books, solve problems, educate and inspire one another — all through bits instead of stuff. And we can pay one another using the same money we use to buy real stuff.

Its a great big idea and some I guess are already doing that. The big issue is also that jobs have come to define us as people. “What do you do?” is the line of interrogation that goes when first meeting someone perhaps for the first time. Brain surgeon or bank robber? Work and identity become hugely important.

In a post entitled Modern Life is Rubbish I refer to the work of Richard Sennett,

In, The Corrosion of Character: The personal consequences of work in the new capitalism. Richard Sennett describes how the sense of hopelessness, and isolation, deconstructs our character in the workplace, with ultimate tragic consequences. For Sennett, “character” is defined as the capacity to construct and keep commitments – not just in marriage, but also in friendships, communities, and workplaces – and the ability to provide continuous, coherent narratives of personal experience. In Sennett’s view, the “unfettered capitalism” that describes our recent history in labour markets, work schedules, institutions, and technology – renders “character” impossible. Contemporary capitalism demolishes the social and cultural foundations of “character,” and upholds instead the punishing ideal of incessant change.

Rushkoff concludes, “for the time being, as we contend with what appears to be a global economic slowdown by destroying food and demolishing homes, we might want to stop thinking about jobs as the main aspect of our lives that we want to save. They may be a means, but they are not the ends”.

The nature of work and identity are in fact a key aspect of No Straight Lines, firstly in understanding why the old industrial system has ultimately had a corrosive affect on humanity and therefore HOW we can create better ways in which we can work, live and love.